Background: One of the original facial implants ever made was for a short chin. Chin implants are the oldest facial implant used and can do a job of lengthening a wide variety of horizontal chin/jaw deficiences. Other jaw deficiences in the angle area on the back end of the jaw can also be augmented by differing jaw angle implant styles as well.

But the one type of jaw deficiency that can not be treated by any type of off-the-shelf preformed implant is that in the vertical dimension. The vertically short jaw is characterized by a lower third of the face that looks small and disproportionate. The chin may or may not be horizontally short and one may or may not have a large amount of overbite dental relationship. A vertically short lower jaw violates the classic canons of the facial thirds for a well proportioned face.

Correcting the vertically short jaw requires an unusual type of implant. It must be one that mostly sits on the lower edge of the bone and wraps around the entire jawline from angle to angle. This can only be obtained by making a custom implant from the patient’s own anatomy using a high resolution 3D CT scan.

Case Study: This 26 year-old young man wanted to have a stronger lower face/jaw appearance. He had always felt his jaw was short and, out of habit, he always held his jaw lower with an open bite relationship to make it look bigger. He had done this jaw repositioning habit almost all of his life. In obtaining his best jaw posiiton, the distance between his central upper and lower central incisors was 8mms. 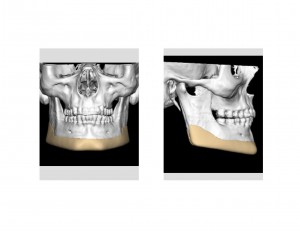 A 3-D CT scan was obtained of his face and a custom vertical lengthening jawline implant designed. Based on experience with other jaw lengthening implants, the implant added 8mms of length at the chin which tapered back to 3mms at the jaw angle to keep a mandibular plane angle. A more square chin width was designed but only 3mms of width was added at the jaw angles. It was made as a single piece implant of firm durometer.

Under general anesthesia, a curved submental and bilateral ascending ramus incisions were made to create a subperiosteal tunnel around the jawline. The implant was sectioned in the midline and inserted from the submental position and properly seated on the bone. Screw fixation (2.0mms) was used on each side of the split chin implant for stabilization. Through the intraoral incisions, the correct position of the implants was confirmed and were stabilized by 1.5mm screws through a percutaneous technique. 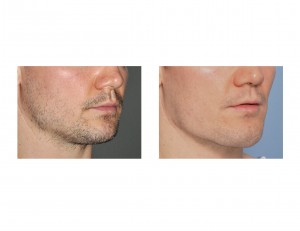 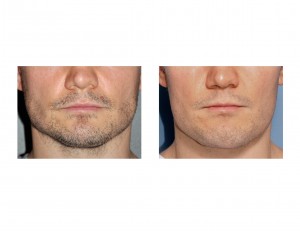 His early postoperative course showed a large amount of swelling as anticipated. By ten days after surgery enough swelling went down to be passable and at three weeks the majority of the swelling had resolved. However, the final result of the surgery is not judged until three months later when one can be assured all of the swelling was gone. 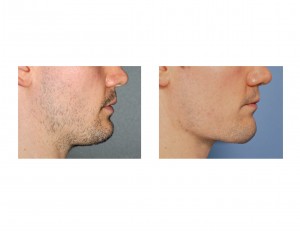 The vertically lengthening wrap around jaw implant can effectively increase the height of the lower face to make it either proportionate to the upper two-thirds or even stronger. Its fabrication from a 3D CT scan assures the most symmetrical shape and other desired features of the jawline/chin area are incorporated into it. This new type of custom facial implant design is reflective of a what modern imaging and computer design processes can achieve.

1) The vertically short lower jaw is a completely different and more challenging problem than one that is horizontally short.

2) A wrap-around custom vertically lengthening implant made from a patient’s 3D CT scan equalize the height of the lower face to the upper two-thirds of the face.

3) While large, a wrap-around jaw implant can be inserted through a combined submental and intraoral approaches.