Background:  Fractures of the cheek bone, like the nose, are common due to the prominence of these bones on the face. They are frequently exposed to trauma from sporting activities to fisticuffs. It fractures along the numerous legs of its bony attachments which is where it gets its common name, tripod fracture. It also goes by many other names such as zygoma fractures, trimalar fractures, and orbitozygomatic fractures.

The tripod fracture, more anatomically described as a zygomaticomaxillary complex (ZMC) fracture, is comprised of three (technically four) bone fracture lines. The first portion of the fracture involves the maxillary sinus which includes the anterior and posterior buttresses or supports of the maxilla as well as an overlying floor of the eye socket. (orbit) The second portion involves the zygomatic arch which attaches to the main body of the zygoma. (cheek bone) The third portion involves the  outside bone of the eye socket (lateral orbital rim) up to the zygomaticofrontal suture line. The fourth fracture line, often overlooked, is the sphenozygomatic suture which is located deeper in the eye socket.

When the cheekbone sustains trauma, the impact force disrupts all four legs of the bone. When this happens the cheek bone tilts downward into the maxillary sinus causing a loss of cheek projection and the appearance of a lopsided face. Depending upon the severity of the impact force will determine how far the bone settles into the sinus and the degree of flattening of the cheek. If severe enough the eyeball will also drop down if the bone of the floor of the eye is sufficiently broken. This may cause a tilt downward of the corner of the eye also.

Case Study: This 28 year-old male was struck on the left side of his face in an altercation in a bar. His face became very swollen and bruised days later and he had persistent numbness of his upper teeth and lip. The swelling and bruising went down weeks later but the numbness continued. By a month after the injury he noticed his face was flat and sunken over his cheek area. 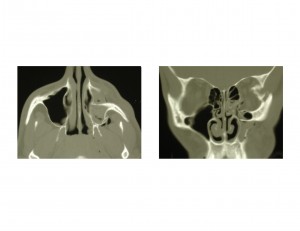 The sunken cheek area was obvious and it was painful to touch below the lower eye socket rim. A CT scan showed a severely displaced ZMC fracture with near complete rotation into the maxillary sinus. Compared to the opposite normal side, the degree of cheek bone displacement was considerable. 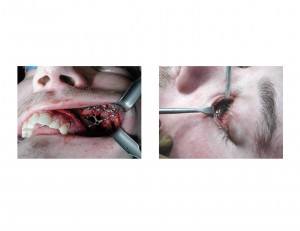 Under general anesthesia, a combined intraoral and transconjunctival lower eyelid incisions were used to approach the fracture. The cheek bone was disimpacted and rotated back upward into anatomic position and secured into place with multiple 1.5mm plates and screws. Any loose bone fragments were attached to the metal mesh. A fine metal mesh was used to rebuild the lower orbital rim. The large infraorbital nerve was entrapped in the fracture but not severed. Both mucosal incisions were closed with dissolveable sutures. 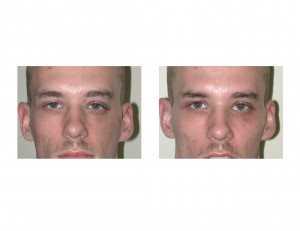 His postoperative recovery was just like the original injury, taking nearly three weeks for all swelling and any bruising to subside. At six weeks after surgery, he had much improved facial symmetry from all angles of viewing. His lip and teeth were still numb but hope remained for a full nerve recovery which could take up to a year to occur. 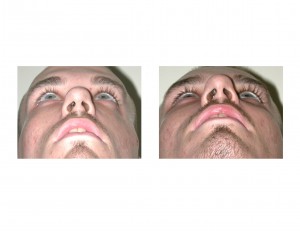 Delayed repair of cheekbone fractures can be done months after the initial injury as these thinner facial bones take a long time to heal. They initially heal by fibrous union as they can relatively easily be moved around even 3 to 6 months after being displaced.

1) Cheek bone fractures almost always cause a loss of cheek projection and lowering of the floor of the eye as the bone rotates into the maxillary sinus.

2) The key to good results from cheek bone fracture repair is to disimpact the bone from the sinus and re-establish the maxillary buttress and infraorbital rim contours with rigid miniature plate and screw fixation.

3) Delayed repair of cheek bone fractures can be successfully done even as late as 6 months after the initial injury.