Background: The intraoral approach to chin surgery for either implant placement or bony reshaping is common. Reaching the chin bone requires going through the origin of the mentalis muscle. (technically some attachment of the muscle to the bone is left to put back together during closure) While such intraoral access is common and very effective, there is always the risk of scarring of the incisional pathway.

When adverse scarring and contracture occurs from an intraoral vestibular incision, it is often associated with tightness of the labiomental fold and the lower lip. In some cases pulling outward of the lower lip demonstrates adhesion at the depth of the vestibule. Some patients may complain of lower lip incompetence and even speech difficulties.

Treatment of a tight labiomental fold from prior chin surgery can be done by a variety of techniques. Injections of 5FU or steroids is one option that may help soften and release the scarred tissues if not too far removed from the last surgery. Synthetic injectable fillers, although tenporary, may help release the adhesion by volumetric expansion. More definitive surgical approaches involve the introduction of new tissue into the contracture either through autologous fat injections or the placement of a dermal-fat graft. 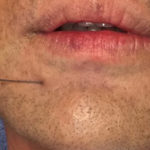 Case Study: This male had a prior history of multiple chin procedures for a sliding genioplasty followed by mentalist resuspension to relieve his contracted lower lip and tight labiomental fold. The latter procedure was ineffective. He suffered from continual lower lip tightness, lower lip contracture and speech difficulties. Before considering him for further surgery, he had 1cc of injectable filler placed which provided a significant improvement in his symptoms although not completely cured. 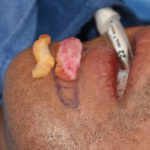 Under general anesthesia an intraoral approach was used used to release the under side of the labiomental fold skin from the muscle. A dermal-fat graft harvested from his flank was placed as an interpositional graft between the underside of the skin and the muscle.

The dermal fat graft was placed, dermal side up, using percutaneous suture placements for positioning prior to closure.

The tight labiomental fold should be clearly differentiated from chin ptosis which is a different type of postoperative chin problem. Resuspension is the treatment for chin ptosis. But the tight or scarred labiomental fold is not an exclusive muscle problem. The muscle may be part of the scar problem but that can not be improved by any specific procedure. The lower lip, however, can be released as a partial adhesiolysis and with the placement of an interposition graft allowed to be elevated and have improved mobility.

2) Testing whether relief could be obtained from a labiomental fold release and fat grafting procedure is first done using temporary synthetic injectible fillers.

3) A positive injectable filler test demonstrates that either injectable fat grafting or an intraoral release and interpostional dermal-fat graft could be effective for symptomatic improvement.