Chin augmentation typically refers to a horizontal increase in the forward position of the soft tissue chin pad. This is typified by almost every imaged and actual before and after surgical result being shown in the side view. While this is a valuable perspective on which to judge chin projection, it is only a 2D rendering (horizontal and vertical) of a 3D structure. The oblique and frontal views provides how the chin can or does look with a view of its effect on width and as well as another angle on its verticality.

The vertical length of the chin is an important dimension to consider when augmenting the chin as well. Some chins that are horizontally deficient are vertically short as well. Most standard chin implants are resigned to sit on the bone and create a purely horizontal effect. While it is true these chin implants can be positioned slightly lower in the chin to gain a slight amount of vertical increase that is not the same as creating a truly combined horizontal-vertical chin augmentation effect. Only a vertical lengthen chin imply can do so.

Case Study: This female wanted to have an overall stronger chin that provides both an equal amount of horizontal and vertical augmentation 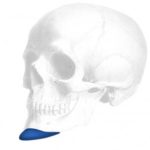 Under general anesthesia and a submental incision, a medium vertical lengthening chin implant was placed. It was reduced on the sids to not make the chin too wide. This is a unique chin implant because it is deigned to sit on the edge of the chin by which it creates its 45 degree vector of augmentation.

Her after surgery result shows a chin that exhibits this 45 degree augmentation effect. This also helps reduce any submental fullness by bring the chin point down to a more level plane with it. She also had jaw angle implants done as well for a more complete jawline augmentation effect.

1)  Chin augmentation is typically perceived as the need for an increase in horizontal projection.

2) Some chins that need a horizontal dimensional increase may also benefit but some vertical increase as well.

3) A 45 degree increase in projection of the mandibular symphysis requires a vertical lengthening chin implant.