Background: Collections of excess skin rolls all over the body occurs from a variety of conditions. The most common  is from aging with weight loss being a second source of its occurrence. While such rolls of skin can be aesthetically bothersome for some people, others accept it as a natural body process.

One very unique body area for skin rolls to develop is on the mid-joint of the extremities. At the elbows and knees, which have a wide range of  motion of just over 160 degrees, skin rolls develop by the repeated joint motion over time. These skin rolls appear at top of the joint when it is in full extension and ‘disappear’ when the joint undergoes flexion. This means they appear at the back of the elbow and at the top of the knees.

Treatment of these joint-related skin rolls is difficult as no non-surgical therapies for skin tightening will not work. Liposuction provides no benefit since the cause is not fat-based and often makes look even worse with the volume deflation. Fat injections may have a plumping effect but this often ends up looking swelling and fat survival is poor is any area of high motion.

Case Study: This middle-aged female was bothered by the rolls of skin that had developed on the back of her elbows. She was a very thin female with small arms with little subcutaneous fat. She felt that the trade-off of a scar above the elbow was better than the appearance of the skin rolls. 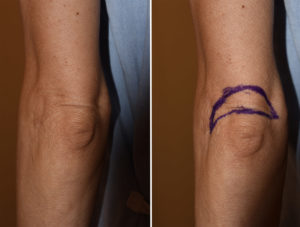 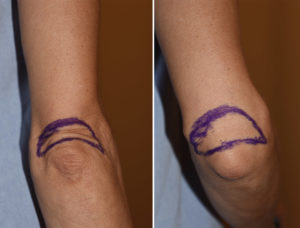 The patient was initially marked in the standing position with the arm extended. A superior elliptical crescent was marked along the skin roll in natural skin fold lines. After marking the arm is flexed to 90 degrees and the expansion of the excisions pattern could be appreciated. A pinch test is done of he two marked lines to see how tight the closure would be if it was all removed. If it feels to tight the superior crescent marking is lowered. The inferior crescent line always remains in the elbow skin crease which on extension is laying almost onto the joint. But with flexion it can be seen that it moves superiorly than one would think.

Under local anesthesia, the skin excisions are performed removing some deeper tissues but not down completely to the fascia. A layered closure is done using all restorable sutures. Glued in tapes and an ace was are used for dressing. After surgery the only restriction is to avoid as much as possible bending the elbow much past 90 degrees as much as possible.

The elbow lift is the smallest of all body lift procedures. It is a small surgery with fairly easy recovery. While very effective at removing the skin rolls, one must have a strong belief that the scar is better than the skin rolls. To avoid wide or hypertrophic scarring, the tissue excision pattern must take into account the flexion motion of the elbow joint to avoid over resection, a very tight closure and a subsequent wide scar.