For men who seek brow bone augmentation, the traditional treatment options have had their drawbacks. Access to the brow bone area has had to be done through a long open incision placed either at the hairline or further back in the scalp. This has some obvious limitations for many men given what their frontal hairline pattern and density may be. In addition, there are no preformed brow bone implant options available. As a result various types of bone cements have to be used, which can be done successfully, but still requires a wide open forehead exposure to do. 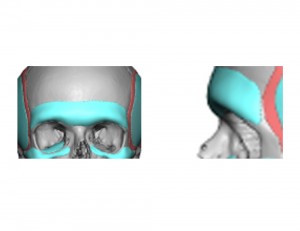 Case Study: This 23 year-old young man wanted to have a more prominent and masculine brow bone appearance. His forehead was not particularly recessed or retro-inclined but there was no distinct brow bone bulge or brow bone break up into the forehead. He was interested in a limited method of brow bone augmentation using implants rather than bone cement. A 3D CT scan was done from which a one-piece brow bone implant was designed. 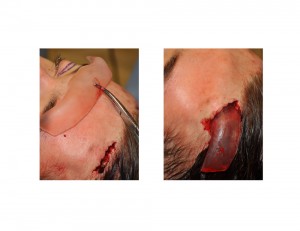 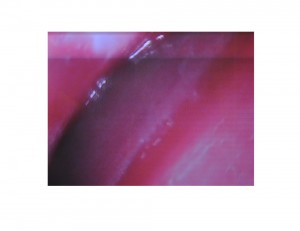 Under general anesthesia, two small (2.5 cms) irregular incisions were made at the edge of the hairline. Under endoscopic visualization subperiosteal elevation was done down to the lower edge of the brow bones where the periosteum was released from one frontozygomatic suture to the other. The supraorbital neurovascular bundles were dissected out and made sure that they were not at risk form compression by the implant. The custom brow bone implant was soaked in antibiotics and then inserted through one of the incisions. It easily slide into position and had a virtual ‘snap fit’ into place. The position of the implant was confirmed through the endoscope. No fixation of the implant was needed due to its custom fit. 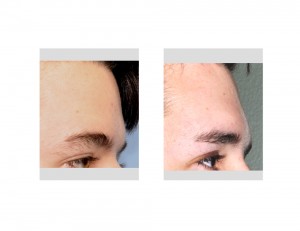 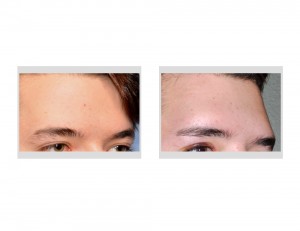 A custom implant offers a surgically straightforward and reliable method of brow bone augmentation. It avoids the historic need for a long open scalp incision, reducing morbidity and expediting recovery. Through a computer design process, thickness, symmetry and maximal point of projection of the implant can be assured.

The endoscopic approach provides good pocket dissection and visualization of the supraorbital nerves for implant insertion and placement. While this works extremely well for implants, it would equally so for preformed or standard sized brow bone implants if they were available.

1) Brow bone augmentation as an isolated procedure can be done through either preformed or custom implant designs.

2)  An endoscopic approach through two small scalp incisions can be used for brow bone implant placement with very minimal scarring.

3) An endoscopic implant placement technique now makes it more feasible for men or women who seek a higher profile to their brow bones.