Background: Tummy tuck surgery is one of the most popular of all body contouring surgeries. While it usually results in a hip to hip scar in a traditional tummy tuck surgery, most women consider this a very acceptable trade-off for the abdominal flattening result obtained. While the abdominal scar can have its own aesthetic issues such as placement, shape and width, scar revision can often make improvements if needed.

What many people do not realize is there are many different variations of tummy tuck surgery. It is often seen as an operation consisting of only a full and mini- tummy tuck choice. But that is a simplistic approach to an operation that has up to eight (8) different tummy tuck types. The choice of tummy tuck is determined by how much abdominal skin and fat need to be removed and haw far around into the back the excision need to be done.

Case Study: This 42 year-old female wanted to improve her abdominal shape after multiple pregnancies and a 40 lb weight loss. She had lost about the most weight that she could and had hit the ‘wall’ when it came to making any further abdominal reduction/reshaping on her own. 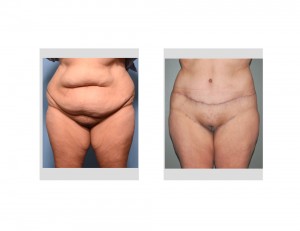 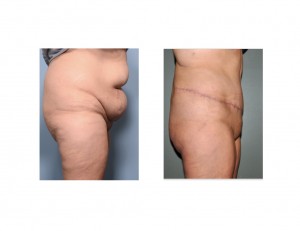 Under general anesthesia, a large horizontal ellipse of skin and fat was marked out which went above the belly button. It was removed in a full thickness fashion down to the abdominal wall. The central part of the upper abdominal flap was undermined so that midline rectus fascial plication could be done. The upper abdominal skin flap was brought down to close to the lower pubic side of the excision. To adequately work out the large ‘dog ears’ that resulted at the ends of the incisional closure, further ellipses of skin and fat resulted in the abdominal closure extending around the hips creasting a near 300 degree wrap around the waistline. 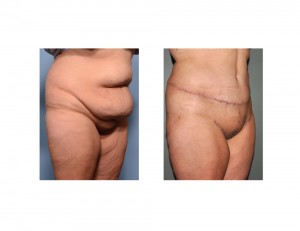 Such extended tummy tucks are needed when there is more than one abdominal roll. Single abdominal rolls can be removed and the length of the scar kept to just around the hip area. But when the vertical ellipse of abdominal skin is more extensive as occurs in double rolls, the eventual length of the tummy tuck scar will find its ways into the back.

1) The double roll abdominal deformity requires an extended tummy tuck to adequately remove the loose abdominal skin and fat and create a near flat abdomen.

2) The extended tummy tuck creates a long incision and resultant scar that goes beyond the hips onto the back.

3) The recovery from an extended tummy tuck is no longer than that from a traditional shorter scar tummy tuck.