Background: A tummy tuck is the most commonly performed excisional body contouring procedure in plastic surgery. Despite its well recognized name, this abdominal surgery can be performed in a variety of ways based on the extent of the patient’s deformity. The size of the abdominal tissues removed, the location and extent of the resultant scar, whether the muscle fascia is plicated and the concomitant use of liposuction are all elements to be considered in any tummy tuck surgery.

One type of abdominal deformity that requires a more extensive tummy tuck is that of the abdominal pannus. A pannus is when any amount of excess abdominal tissue hangs over the waistline. (known as an apron of skin) Years ago such abdominal pannuses were very large and existed in extremely overweight patients. But with the introduction of bariatric surgery and other non-surgical forms of weight loss, the most common abdominal pannuses seen today are more deflated tissues that are often primarily large amounts of loose skin. By definition when this amount of excess skin is removed the length of the final incisional closure will create a scar line that passes the hip points.

But despite the smaller abdominal pannuses seen today, there still exists some fuller ones. These are patients that have probably not had bariatric surgery but have incurred some weight loss on their own. These fuller pannuses hang down and often obscure the pubic region as well as the thigh creases.

Case Study: This 33 year-old female had lost some weight after multiple pregnancies which left her with a moderately-sized abdominal pannus. The pannus hung down onto and over the pubic mound wth thicker upper abdominal tissues which extended into the back. 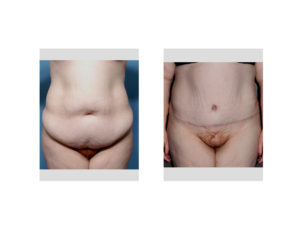 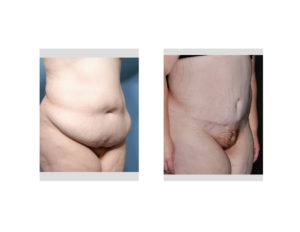 Under general anesthesia she had an extended full tummy tuck with umbilical translocation and liposuction to the flanks into the back. Even with the extension of the tissue removed into the back, thinning out the surrounding tissues was still necessary to get rid of any hip/flank rolls. 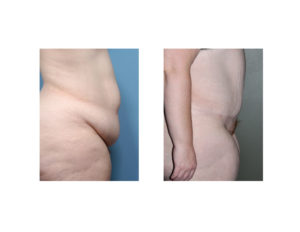 The extended tummy tuck has many benefits which include getting the tissues off of the pubic area. (pubic reveal) Besides the benefits that are created for clothing wear it also has hygiene benefits as well.

1) Weight loss and pregnancies can create a thick overlying abdominal pannus that obscures the pubic region.

2) An extended tummy tuck is needed to remove a pannus whose incision will extend back behind the hips.

3) An extended tummy tuck may benefit by the addition of flank liposuction to avoid the creation of excessive fullness at the ends of the incisions.