« Necklifts for the Younger Patient
Avoiding Complications from Buttock Implants »

Background: Chin augmentation is a very common plastic surgery procedure that helps bring into balance the lower face with more projecting upper facial features. It is by far most commonly done with synthetic implants that provide varying amounts of increased horizontal projection as well as some width changes. Less frequently, sliding genioplasties (chin osteotomies) are done for chin augmentation when more horizontal projection is needed than implants can provide and/or vertical lengthening is aesthetically beneficial as well.

In more extreme cases of chin deficiencies, neither implants or an osteotomy is really adequate. When the chin is really short, this indicates that the entire lower jaw is underdeveloped and an overlying malocclusion (bite deformity) exists as well. While this type of patient should ideally have orthodontics and subsequent orthognathic surgery for jaw correction, this may not be an option for many so afflicted patients. While one could argue that an implant or an osteotomy is better than nothing, and that is most certainly true, they will fall far short of the needed amount of augmentation.

Extreme cases of chin deficiences require a novel approach to get visible and satisfactory results that often must approach 20mms of increased horizontal projection. Combining an osteotomy with an implant is relatively unprecedented although there is no reason why they can not be done together. The implant can merely be placed on the front edge of the osteotomy which is naturally denuded of soft tissue for the execution of the bony cut. Because there is no defined soft tissue pocket, it would be critical to secure the implant to the bone to avert displacement later. 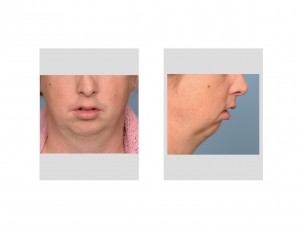 Case Study: This 35 year-old male presented for chin augmentation. He had seen other plastic surgeons who told him his chin was too small for an implant. He did not want at this point in his life to undergo the orthognathic surgery process. In addition, he did not have the quality of dentition that would support in good health a prolonged course of orthodontics. By measurement in photographs using the Frankfort horizontal plane, his soft tissue chin point was deficient by 29mms from an ideal horizontal position. At this amount of horizontal deficiency, he also had a vertical chin deficiency as well.

Through an intraoral approach, an obliquely-oriented horizontal chin osteotomy was done staying 5mms below the mental foramen. The chin was downfractured and then advanced and held into a maximally advanced position with a step plate secured with screws above and below the osteotomy line. A maximal advanced position is one in which there still remains a small amount of bony contact between the front edge of the upper chin bone and the back edge of the advanced chin segment. The step plate was bent downward to create some vertical lengthening as well. 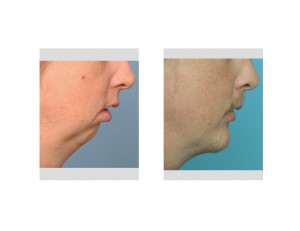 To get more chin projection than just that of the bone, a 7mm extended synthetic implant was placed on the front edge of the advanced chin bone. It was secured to the chin bone with a screw on each side of the midline. The wings of the implant extended back along the advanced chin bone to ensure that they covered the end of the osteotomy site where a bony notch typically occurs. The mentalis muscle was then reattached and closed in two layers with a single mucosal layer closure. 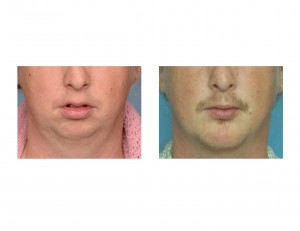 His postoperative course was typical for any sliding genioplasty patient. There was swelling and bruising along they jawline and neck that persisted for about three weeks after surgery. When seen at three months after surgery, all swelling had resolved and he had no residual mental nerve numbness. He had dramatic improvement in the appearance and shape of his chin, even if it still was mildly deficient. At ten years after his surgery, he has not had any implant or bone healing problems.

1)      Severe chin deficiencies are not optimally treated by synthetic implants or osteotomies alone. Neither are capable of increasing the horizontal chin projection more than approximately 15mms.

2)      Combining a sliding genioplasty with an implant in front of it can achieve horizontal projection increases of up to 20mms.