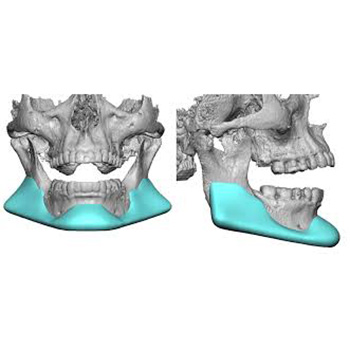 Background: Custom jawline implants are the most powerful augmentation method of the lower third of the face. By increasing the outer contours of the lower jaw throughout its entire length, the continuous surface area coverage can have a powerful effect. Unlike standard implants which are often viewed in one dimension (e.g., chin implants and their horizontal projection or jaw angle implants and their width or thickness), custom jawline implant should be viewed in a more 3D fashion. This is hard to do for patients and surgeons alike since standard 2D facial implants do not provide that perspective.

Case Study:  This young male had a prior history of indwelling Medpor chin and jaw angle implants. These standard implants did not add enough augmentation in any dimensions so he sought a custom jawline implant approach.

He decided to at least double the chin projection and jaw angle widths, up to 25mms on each side of the jaw angle. When the designed chin and jaw angles desired dimensions were connected it could be seen that this was an extreme custom jawline implant design.

Under general anesthesia his Medpor chin and jaw angle implants were removed. A large existing submental scar allowed an unprecendented view of his chin area. Due to the size of the implant it was necessary to split it in the middle in a geometric interlocking fashion. It was introduced in a back to front technique to protect the mental nerve and re-united in the midline with sutures and bilateral screws.

He went on to heal uneventfully but decided after three months that it was too big. He has opted for a new custom jawline implant with more modest dimensions.

2) With jaw angle implant widths of more than 2 cms, a split insertion technique is always going to be needed.

3)  A custom jawline implant can have a more powerful augmentation effect than some patients can know. If it looks too big on the design then it probably will be once surgically placed.