Background: A well-defined and strong jawline is a desireable male feature. While modern culture and media have made it seem a recent attractive male trait, it has been so for as far back in history as pictures have been drawn and sculptures have been created. A strong lower facial structure provides not only good aesthetic proportions but implies increased masculinity and facial attractiveness. 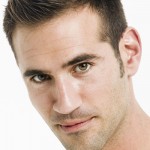 Total or complete male jawline enhancement can improve the structural shape of the lower jaw by increased chin and jaw angle projection through the use of implants. Since the mandible has somewhat of a parabolic curved shape, the front and back ends of the curve must be changed to give it greater angularity. The chin needs a more square form horizontally and the jaw angles need a more square form vertically as well as more outward horizontal flare.

The amount of ‘strength’ of the jaw line that any particular male wants is a very individual decision. There are some general guidelines as to how much chin and jaw angle flare is aesthetically acceptable. The square width of the chin should stay within a vertical line dropped down from the pupil of each eye. The outward flare of the jaw angles should not go past a vertical line dropped down from the midpoint of the zygomatic arch. The lower vertical edge of the jaw angle should sit above the lowest point of the chin in side view so that the mandibular plane angle is not flat. While these aesthetic jawline guidelines stay within the proportions of the balanced face, some patients may desire a stronger jawline look. To achieve a very strong or extreme jawline enhancement, implants have to be selected that exceed these aesthetic facial boundaries but also stay proportionate.

Case Study: This 50 year-old male wanted to achieve more of a stronger facial look with greater skeletonization and prominence of his facial features. A big part of his desired look was a significant change to his jawline. While his chin was not unduly deficient, his jaw angles were significantly narrow, vertically short and ill-defined. 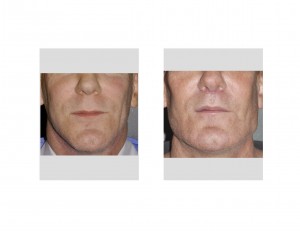 Under general anesthesia, his chin was changed by performing an intraoral vertical reduction osteotomy onto which was overlaid a medium silicone square chin implant to provide width and an additional 3mms of horizontal projection. Jaw angle implants were placed intraorally that added 10mms of vertical lengthening and 11mms of increased width. He also had cheek implants placed to his new jawline did not overwhelm his upper face. 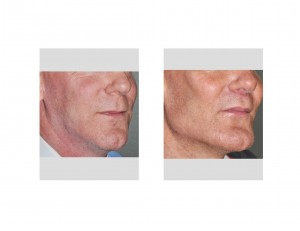 He had the typical jawline implant recovery with a first week of significant swelling and trismus. (limited jaw opening) By three weeks after surgery, however, much of his swelling subsided and the outlines of the augmentations were more discernible. By six weeks the final shape of the jawline could be seen. While the time period of three months after surgery is the real final evaluation point, 90% to 95% of the result is evident by six weeks. Strong jawline enhancement requires a square chin and prominent jaw angles. One of the key features to a stronger jawline is to increase the vertical length and flare of the jaw angles. To keep the face proportionate and to stay within its aesthetic boundaries, cheek augmentation may be needed to prevent too heavy of a lower facial look. Case Highlights: 1) Total jawline augmentation involves chin and jaw angle implants. 2) Creating a strong and well defined jawline in men involves a more square chin and a three-dimensional change to the posterior jaw angles. 3) Strong jawline augmentation creates a prominent flair and vertical lengthening of the jaw angles and a square chin that will create more of a square shape to the face. Dr. Barry Eppley Indianapolis, Indiana