Background: There are a variety of upper lip enhancement procedures from injectable fillers to lifts. By far lip lifts represent just a minority of cosmetic lip procedures done and, as a result, is a frequently misunderstood operation. A subnasal lip lift can be confused with a lower lip advancement because they are both excisional procedures. But a lip lift truly does lift the lip up while a lip advancement pushed up the vermilion from below.

The appeal of a subnasal lip lift is that the scar rests in a relatively concealed area along the base of the nose. When performing the procedure it is important to recognize that the interface between the base of the nose and the lip is not a straight line. It is a multiply curved interface hence the urban name for a subnasal lip lift…the bullhorn lip lift. But despite the appeal of the scar location, a lip lift has its limitations and it is important that patients understand what they are before undergoing to the operation.

By removing skin from under the nose, the vertical distance of the upper lip is effectively shortened. That is its primary effect and by so doing there will be an increase in the fullness of the cupid’s bow vermilion. But beyond the centrally located cupid’s bow the vermilion along the sides of the lip will not change. Draw a vertical line down from the sides of the nostrils and any part of the lip lateral to it will be unaffected by a lip lift. Also, contrary to popular perception, a lip lift will not increase upper tooth show. That area is simply too far away from the point of pull to be affected. To improve tooth show at the time of a subnasal lip lift, a lower horizontal vermilion excision is needed at the same time.

Case Study: This 44 year female felt she had a long upper lip and wanted it shortened. She also wanted the lip lift to look natural and not be overdone. The length of the upper lip along the philtral columns was 18mms. 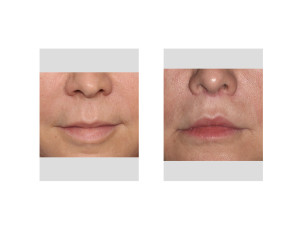 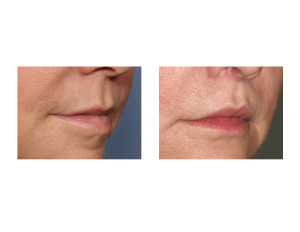 Under local anesthesia, a bullhorn pattern of skin excision was marked under the base of the nose and removed. An excisional width of 4.5mms was made along the philtral columns, making it 25% of the total upper lip length. At three months after the procedure the subnasal scar redness is fading nicely and the stability of the lip lift maintained at 14mms of philtral column length. 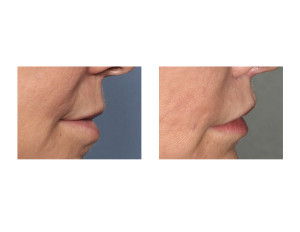 3) A subnasal lip lift will usually not increase upper tooth show and will not increase the fullness of the sides of the lip.