« Plastic Surgery History: Burn Surgery and The Walking Tubed Pedicle Flap
The Global Differences in the Corner of the Mouth Lift »

Background: A brow bone prominence is largely a male feature caused by a greater pneumatization (expansion of air cavity) of the frontal sinuses than in women. While female brow bones are relatively flat, most men will have some degree of prominence or ridging that creates a brow bone break as it ascends into the forehead. Thus some degree of a brow prominence is well tolerated in men and may even be aesthetically desireable as a strong gender trait.

Excessive pneumatization of the frontal sinuses creates a brow bone prominence that extends well beyond the natural plane or slope of the forehead. Whether a brow bone prominence in some cases is excessive is a matter of personal judgment, in others it is so extreme that it is obvious. Brow bone reduction surgery, usually by an osteoplastic flap method, is the only effective treatment to reshape this lower portion of the forehead.

When considering whether brow bone reduction should be done, the shape of the forehead above it must also be considered. In many cases, the upper forehead is normal and setback of the brow bones is all that is needed. In other cases, a combination of brow bone setback and forehead augmentation produces the best profile change. In rare cases, the brow bone position is normal and it is the excessively sloped forehead that is the culprit. (pseudo brow bone prominence.

Case Study: This 35 year-old male felt he had too strong of a brow bone and disliked his forehead shape. He had a significant retroclined angulation to his forehead and this raised the question as to whether his brow bones had too much horizontal projection or that the forehead projection was deficient. Computer imaging was done to determine whether brow bone reduction or forehead augmentation produced a better forehead profile appearance. 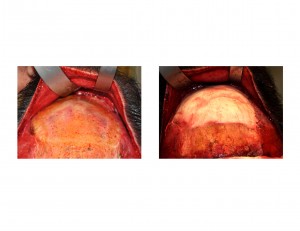 Under general anesthesia, he had a coronal (scalp) incision placed way behind his hairline (16 cms) and raised to expose his forehead down to his brow bones. The forehead above his brow bones was built up using 50 grams of hydroxyapatite cement into a smooth transition into the upper forehead and staying within the temporal lines and off of the temporalis muscles. (fascia) 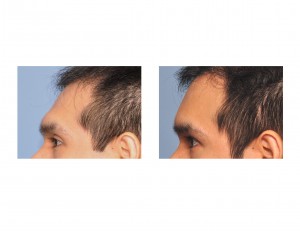 His after surgery result showed exactly what was predicted by computer imaging beforehand. He has a much better forehead shape and his brow bone prominence was ‘gone’.  Changing the slope of his forehead was the source of his aesthetic forehead deformity. 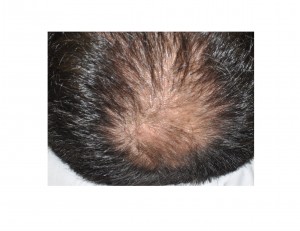 Of great interest for any man is the risk of adverse scarring from a coronal scalp incision. Scalp incisions in men must be done with the greatest of care and concern for the aesthetic outcome. The healing of his incision, as judged across the top where his hair was the thinnest, was amongst the finest that I have ever seen. (very hard to detect even on the closest of inspection)

1) A prominent brow bone can be the result of a recessed forehead. (pseudo brow bone prominence)

3) Forehead augmentation is done through an open scalp incision and can be done with either hydroxyapatite or acrylic bone cements.