Background:  The aging face is marked by many soft tissues changes due to falling tissues. One of those visible aging signs is that of the deepening nasolabial fold. This fold or groove is caused by the sides of the face falling against the fixed tissue of the upper lip. This creates an overhang of facial skin that rolls over toward the lip. As more tissue falls forward, the nasolabial fold gets deeper.

Treatment of the deep nasolabial fold has always been a difficult challenge, particularly at the time of a facelift procedure. No maneuver done underneath a facelift flap has been consistently successful. The pull from the repositioned skin flap during a facelift does not produce a sustained improvement. Even with release of its dermal attachments and the backward pull of the skin flap, nasolabial fold improvement is surprisingly modest.

The only non-surgical treatment, and by far the most common, for nasolabial fold reduction is the use of injectable fillers. This consistently shows that the addition of volume underneath the fold is an effective treatment. The problem with all synthetic fillers is that they are not permanent. Fat injections have been repeatedly tried for more permanent filling of the nasolabial fold but this unfortunately does not work due to fat absorption. 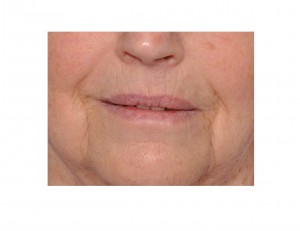 Case Study: This 62 year-old female was to undergo a facial rejuvenation procedure consisting of a facelift, a pretrichial or hairline browlift, bilateral upper and lower blepharoplasties and nasolabial fold reduction by augmentation. Given that she was going to have a hairline browlift, it was decided that her forehead skin would be used as the donor site for the nasolabial fold grafts. 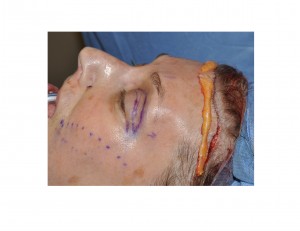 A browlift was performed using the intial incision that paralleled the hair follicles of her frontal hairline. After the forehead skin flap was raised down to the brow bones and the glabellar muscles partially resected, the forehead flap was elevated and the excess skin removed. This allowed the brows to be elevated but the vertical forehead length not changed. The skin removed was 14cms in length, 8mms wide in the center and 9mms in thickness. The outer layer of skin (epithelium) of the forehead graft was removed and cut into two 7cm long grafts. 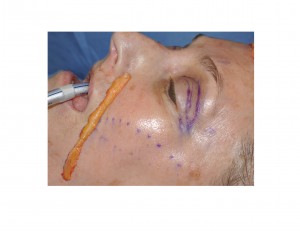 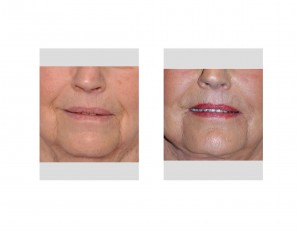 The improvement in the nasolabial fold reduction due to the grafts was both palpable and persistent. At one year after surgery, the fold reduction was still visible.

1) The deep and very visible nasolabial fold is most commonly treated by volume enhancement to soften its appearance.

2)  The most ideal material to put underneath a nasolabial fold is some form of autogenous fat, with a dermal-fat graft being preferable to injected fat.

3) The tissue normally discarded from a pretrichial (hairline) browlift is ideal in thickness and length to make for dermal-fat grafts to the nasolabial folds.