Background: A change in a woman’s breasts is an assured phenomenon over her lifetime. Through pregnancies, weight gain/loss and gravity, breasts usually drop or sag with age.  The amount of sag is often exaggerated by the concomitant loss of breast volume as well. While many women want larger breasts, just as many want or need a breast lift as well.

The amount of breast sagging determines the type of breast lift that is needed for optimal correction. Breast sagging has a well known classification system which grades its degree based on the position of the nipple relative to the inframammary (lower breast) fold in the profile view. While breast implants may provide some degree of lifting in grade 1 or 2 breast sagging, once the nipple and breast tissue hangs below the fold  (grade 3 and 4) a real breast lift is needed.

Breast lifts come in a variety of types that fundamentally differ by how much skin is removed, the resultant scar patterns that are created on the breast mound and how much lift is created. There are four types, 1 (crescent nipple lift), 2 (donut or periareolar lift), 3 (lollipop or vertical lift) and 4 (anchor or full lift) When done as a stand alone procedure without an implant, a full or anchor breast lift is almost always needed for significant sagging. At the same time a reduction in the size of the areola can be done as well.

Case Study: This 26 year-old female had good breast size but they were too saggy. They hung well below her lower breast folds and the areolas were quite wide. She had neck, shoulder and back pain which she felt, probably correctly, that it was from the sag of her breasts. 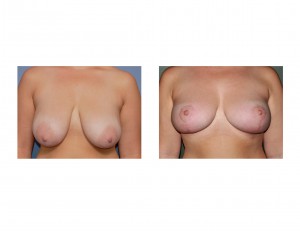 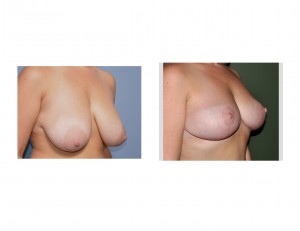 Under general anesthesia, a keyhole pattern design as marked on her breasts with a reduced areolar size. The intervening skin was removed by de-epithelization and surrounding skin flaps were raised down to the pectoralis fascia. The entire underlying breast mound with reduced areolas was then lifted upward and wrapped around by the skin flaps and then closed, created the anchor pattern closure lines. No breast tissue or volume was removed. The new position of the nipples was marked 5 cms above the lower breast fold, skin removed and the nipple-areolar complex brought out and closed. This was done as an outpatient procedure that took about 2 hours to complete. 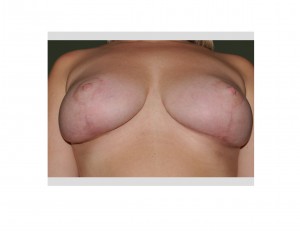 Her breast lift healing was uneventful even though she a small amount of wound separation a few weeks after surgery at the inverted T junction, which is extremely common. At three months after surgery, her scars has matured significantly at the lollipop portion but not yet at the horizontal fold incision yet.

The most effective breast lift is still the anchor pattern or full breast lift. While no woman wants breast scars, significant breast sagging can only be corrected by such a lift. When well done, the resultant scars can be very acceptable.

2) While there are different types of breast lifts, the best lifting effect comes from a full or anchor scar pattern breast lift.

3) Maintaining persistent upper pole fullness is a problem in any type of breast lift.