Background: Scar revision is an inherent part of plastic surgery and is one of its most recognized and historic procedures. While scars occur all over the body, those on the face are the most frequently and successfully improved by various scar revision techniques. While there is a role for the more simpler linear excision and closure of facial scars, more frequently the concept of changing a more linear scar line into a non-linear one is used. This is seen as more effective at both an improved scar appearance and less recurrence of scar widening.

The reason for breaking up a facial scar into a non-linear pattern is based on two fundamental concepts. A linear scar line that runs askew from the relaxed skin tension lines on the face is better hidden when it has an irregular pattern, making the scar harder for the eye to follow. Secondly by having the edges of the scar line interdigitate in an irregular pattern throughout its length the forces of wound contraction are better dispersed through greater surface area contact than having a straight line. This results in a decreased chance of scar widening.

The most common techniques for changing an adverse linear facial scar are based on various geometries such as Z-plasties, running W-plasties and the geometric broken line scar revision. Each of these has a role to play in scar revision and they do not all apply to every facial scar. The geometric broken line scar revision technique is the most common that I use because it offers the greatest disruption of any scar line and this the greatest amount of camouflage. 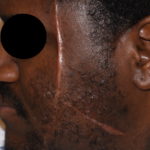 Case Study: This male had a history of a facial scars from a knife injury from years before which developed some wide scarring. These scars were all the more visible because of their lighter color on skin of a darker pigment. 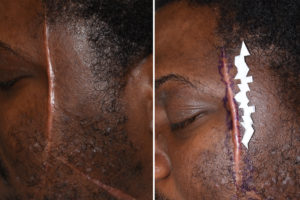 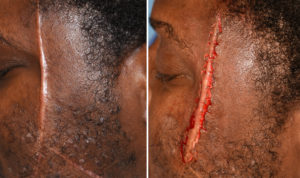 Under general anesthesia a geometric broken one closure pattern was marked out using preformed plastic templates. These plastic templates ensure a good matching of both sides of the scar excision and can be repeated with longer scars. Then using deeper dermal sutures and small removeable skin sutures the edges of the excised. skin were put together to create the irregular closure line. 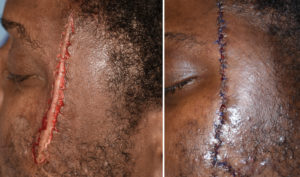 The initial facial scar revision already shows a significant improvement if for no other reason than the wide white scar had been removed.  It remains to be seen if secondary scar widening occurs but this would be unlikely. It will take up to 6 months after the procedure to appreciate the final scar appearance.

2) The geometry of the scar revision closure pattern is not as important as that there is one for both improved camouflage and less tension on the closure.

3) Geometric broken line closure improves a scar’s appearance but it can not make it completely invisible.