Background: The most troubling facial feature in many older males is that of the neck. The development of a neck wattle is bothersome in many ways. It interferes and looks worse in buttoned shirts as it hangs over the collar. It moves and swings unflatteringly as one moves the head from side to side. While many of the aging male features may be perceived as distinguished, the hanging neck wattle is not one of them and seems disproportionately ‘aged’ compared to the rest of the face.

The classic treatment for the aging neck in men is that of a facelift. This is a procedure with a long history of neck improvement that relocates the loose skin from the central neck up and back to the jowl area and side of the face. It does so to place scars in a less conspicuous area around the ears. But for some men this operation has some concerning issues. The hair pattern around the ears for many men can make the concept of hidden scars more difficult. The heavy and thick skin of the male neck is not as easy in which to get a real significant neck change and is very prone to postoperative relaxation. There is also the reality that some older men simply do not want to go through a facelift operation and the recovery that is involved. 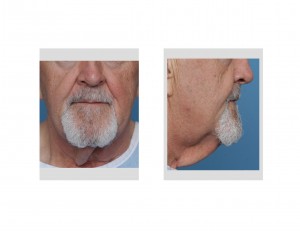 Case: This is a 68 year-old male who found that his growing neck wattle was increasingly bothersome. He was not bothered by the rest of his aging face, the neck was his only concern. While his entire face showed the effects of a life well lived, the size of the hanging neck wattle was hard to miss. While he wanted it removed, he was emphatic about not having a facelift. He was an avid golfer and wanted to return to the links as soon as possible after surgery. As a medical confounding factor, he was on Coumadin for the treatment of atrial fibrillation. 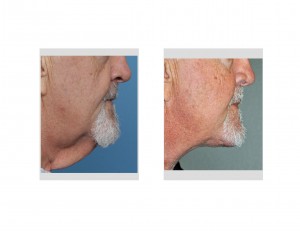 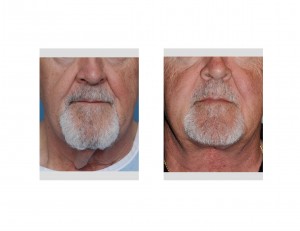 He underwent an excisional necklift through a vertical cutout approach. Under the chin and at the lowest neck skin crease at the adam’s apple area, the vertical excision was combined with horizontal skin removals to avoid unsightly skin redundancies. (dogears) With this skin excision is the removal of full thickness fat down to the split platysma muscle. With the platysma muscle fully exposed, it is sutures together in the midline as part of the direct necklift procedure. Under IV sedation, the procedure was performed in around one hour. The skin was closed with small sutures and covered with small tapes. No drains or other dressings were used. He could shower and shave the next day. His only restriction was not to extend his head backwards for several weeks. He reported at his suture removal a week later that he never had any pain or significant swelling. 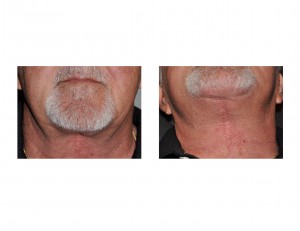 The most important question from a patient’s perspective about the direct necklift is the scar. While men accept that there will be a scar, they want to know how ‘bad’ it will be. As seen in his postoperative results, the scar is not particularly visible. This is a mature scar and there is a period of redness until it gets to this point. On average, it is about three to four months until it fades. Beard skin heals better than skin without hair. The effects of daily shaving (microdermabrasion)may also be of scar benefit.

1) The direct necklift in the older man is a simple and very effective operation that has very little recovery.

2) The vertical and two horizontallimbs of the direct necklift scar heals extremely well in the bearded skin of the older male. While scar revision of the central part of the neck scar may occasionally be needed, the need for it is not common.

3) The central part of the neck is dramatically changed with this operation. It also provides some secondary improvement in the jowls by tightening them inferiorly.