Background: Forehead augmentation is typically done for people that have a lack of projection in the upper third of their face. Flat or recessed foreheads in both projection and angulation can be effectively treated using an onlay material approach. Bone cements have historically been used for such forehead augmentations. But they have largely been replaced in my practice with custom implants due to the need for a much smaller scalp incision and improved accuracy of the desired augmentation dimensions and shape.

While forehead augmentation is typically perceived as an overall effect from brow to hairline superiorly and anterior temporal line from side to side, it can also be done in a subtotal or regional manner. This is most commonly seen in brow bone augmentation where increased projection and shape is limited to the lower third of the forehead.

But a unique type of forehead augmentation is that of the glabellar region. The glabella is defined externally as the area between the eyebrows and above the nose. It is the most common facial area treated by Botox injections for wrinkles into the so called glabellar furrows. At the bone level it is the usual flatter area between the brow bones but above the frontonasal junction. (nasion) Not surprisingly given that it is a flat area between the raised brow bones, the derivation of its Latin name (glabellus) means smooth. In some patients this discrete forehead area can be seen to be too flat or looks too deep between the eyebrows.

Case Study: This young male was bothered by a forehead glabellar that he perceived as too flat. He was going to undergo a hairline advancement and this was an ideal opportunity for glabellar augmentation due to the direct access from the frontal incision.

Under general anesthesia and through his existing frontal hairline, 15 grams of PMMA bone cement mixed with antibiotic powder was applied and shaped into the glabellar defect. Due to the thinness of the augmentation, two small microscrews were used to stabilize its location. 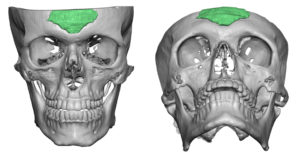 Glabellar forehead augmentation is a discrete facial area whose intent is to lessen its depth or amount of concavity. While it is best done with a custom made implant from a 3D CT scan, if adequate open access exists the use of onlay bone cements can also be effectively done.

2) Such a limited forehead augmentation can be done using an onlay material.

3) With an existing frontal hairline incision or scar, a bone cement onlay can be successfully done.