« What Is A Mini-Facelift?
A Review Of Available Cellulite Treatment Approaches »

Background:  Enlargement of the breast tissue in a teenage or adult male, well known as gynecomastia, is a challenging aesthetic chest problem. It is comprised of several components including the amount of breast tissue, the size of the areola, and the position of the nipple-areolar complex on the anterior chest wall. Much of the focus of gynecomastia surgery, understandably, is on the reduction of the size of the breast mound whether it is throughout the whole chest or just limited to around the nipple-areolar complex.

As a general rule, hard gynecomastia responds best to direct excision as it needs to be cut out. Soft gynecomastia can be extracted without excision by liposuction. Many gynecomastia conditions require both methods given the mixed hard and soft tissue make-up. If glandular tissue is not recognized before surgery, residual lumps or areolar fullness may be left behind by liposuction. 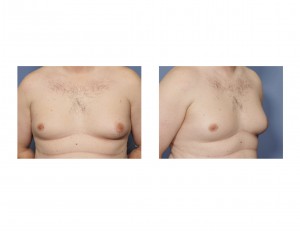 Case Study: This 35 year-old male from Indianapolis had developed increasing chest fullness which started when he was a teenager. It continued to grow as he got older and gained some weight. Exercise did not make it get smaller. He finally resolved to himself that he had to get rid of his ‘man boobs’ by surgery. Examination showed that he had generalized breast mound fullness of which all of the tissue was soft and non-glandular. Even under the nipple-areolar complexes no lumps or firm tissue could be felt.

Under general anesthesia, the chest was first infiltrated with a Hunstad solution. Then through small stab incisions at the side of the chest wall, each breast mound was first treated by a Smartlipo probe to heat all of the fatty tissues. Suction aspiration then removed a total of 1300cc of aspirate from both sides of the chest, a large amount by gynecomastia standards. The chest areas became flat and well contoured on both sides without any residual lumps of breast tissue under the nipples. 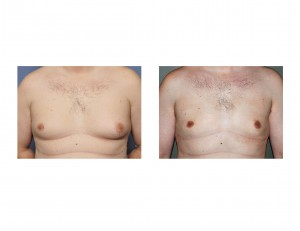 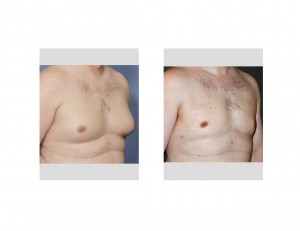 Most cases of gynecomastia surgery require excision if small and a combined excision and liposuction approach when larger. It is not common to find a gynecomastia patient in which a completely flat chest can be obtained in one surgery by liposuction alone. In either case, Smartlipo provides a good method of liquefying the fatty breast tissue in gynecomastia.

1)      Male gynecomastia responds to different treatment approaches based on the type of breast tissue and the size and position of the nipple-areolar complex.

2)      In ‘soft’ forms of gynecomastia without significant glandular tissue, liposuction can be very effective at chest contouring/reduction.

3)      Liposuction of gynecomastia, specifically using Smartlipo, can be done with very small incisions and without the need for drains.