Background: The treatment of large breasts has been done for almost one hundred years with a variety of surgical techniques. Despite the many techniques that have been used to create a smaller breast, the one that has stood the test of time is the inferior pedicle method. Also known as the Wise pattern (as the skin excision pattern looks like a W), this method provides a real three-dimensional skin and breast tissue reduction with a significant breast lift.

While effective, it is not a perfect operation as it results in substantial scars. Fortunately most of these scars lie in favorable breast locations such as around the areola and across the inframammary fold. Only the vertical limb between the areola and the lower fold is in an unnatural skin location when it comes to resisting the forces of tension on it. But it does lie on the lower pole of the breast which is not a highly visible location from a woman’s perspective of her own breasts.

Case Study: This 35 year-old female had DD cup breasts that were problematic from both a clothes and musculoskeletal standpoint. She had back, shoulder and neck pain with shoulder grooving. She had always wanted smaller breasts since she was a teenager but waited until she was done with having children. 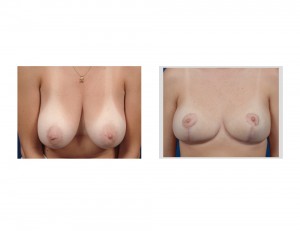 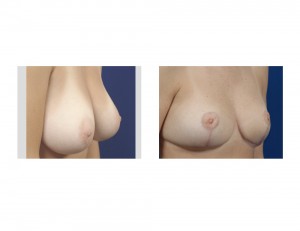 Under general anesthesia, an inferior pedicle breast reduction was performed removing 655 grams of tissue from each breast. All sutures were placed under the skin and no drains were used. This was a three hour operation done as an outpatient. 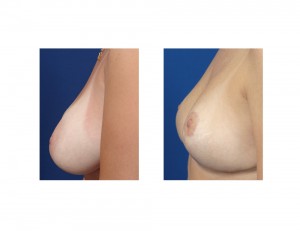 Her recovery took about ten days to remove to work but her incisions took much longer to heal. She developed about three weeks after surgery small opening at the inverted T areas (junction of vertical and horizontal incisions) that spread open to about the size of a dime on one breast and a nickel on the other. These openings took almost one month thereafter to granulate in and heal.

There are two expected events that occur in breast reduction, extensive scars and time to heal them. One has to certain that the benefits of making breasts smaller are worth the scar trade-off to do so. There is also the time needed to reach optimal scar appearance which is at least six months and could be as long as a year after surgery. Also such extensive incisions will result in wound healing problems, albeit often minor, that will take longer to completely heal than most women anticipate.

1) Breast reduction is a highly effective breast reshaping procedure but does so at the expense of scars.

3) The scars from breast reduction will often take up to 8 weeks after surgery to completely heal and up to one year for complete scar maturation.