Background:  The chest deformity, pectus excavatum (funnel chest) is seen as a deep depression of the sternum, usually involving the lower half or two thirds of the sternum. Its deepest indentation is at the junction of the chest and the abdomen. The lower four to six rib cartilages dip backward abnormally to increase the deformity or depression and push the sternum posterior or backward toward the spine.

In most significant cases, pectus deformities are treated surgically with excellent success. The most popular surgical technique today is the Nuss procedure where a rigid titanium bar is placed behind the sternum and pushes it forward. But not all pectus problems are significant enough to either warrant surgery or would pass insurance criteria for it. These more minor pectus deformities are limited to just the very end of the sternum and the xiphoid process.

Treatment options for these more limited pectus deformities are few. Solid types of implants can be hand carved intraoperatively or preformed prior to surgery off of 3-D CTs and inserted. But this requires a resultant visible incision which may not be a good trade-off form a small sternal indentation. In addition, such sternal implants do have a history of potential problems such as mobility and seromas. (fluid collections) 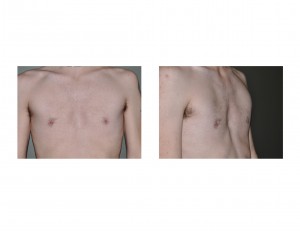 Case Study: This is an 18 year-old male who wanted cosmetic improvement of his sternal deformity. He had been evaluated by a pediatric surgeon who felt his problem was not significant enough to justify sternal recontouring/repositioning. He had no pulmonary problems or limitations with exercise. The lower sternal indentation measured 7cms in height and 5 cms in width. It was a well-defined indentation that measured by water displacement of 10 mls.

He opted for a new injectable sternoplasty approach which had not been previously done. The concept was to place Kryptonite Bone Cement through an injectable technique and allow it to be set and molded as it cured. This calcium carbonate-based material has the flow properties to be mixed and then injected through a small plastic tube. Once set, the material is very adherent to bone and becomes as rigid as the bone to which it attaches. Its porosity (a feature that develops as it sets) allows the potential for bone ingrowth over time. 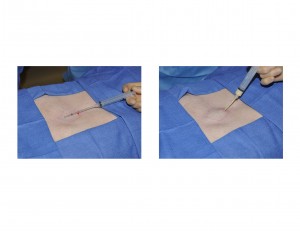 Prior to surgery, the sternal defect was measured in volume and with a playdoh cast to get an idea of the material to be injected. During surgery, a 5mm incision was made over the lower end of the sternal at the edge of the indentation. An elevator was used to make a pocket at the bone level with an effort to be subperiosteal. Then using 5 grams of Kryptonite powder, it was mixed with its two liquid components and mixed for two  minutes. It was then transferred to a syringe which was attached to a 12 French plastic catheter and injected. The material was allowed to cure to a doughy state for 15 minutes and then molded by external pressure on the overlying skin. A lightly compressive circumferential chest wrap was then placed. 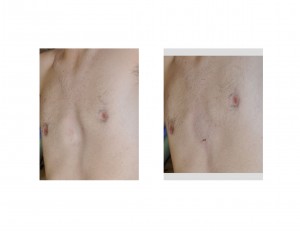 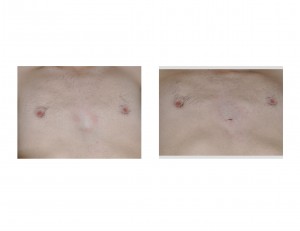 The entire procedure took 45 minutes. The results were immediate with elimnination of the lower sternal indentation. He was discharged as an outpatient. He reported no pain afterwards.

1)      Pectus excavatum presents as a whole range of sternal deformities. More minor manifestations of it affect just the lower third of the sternum and do not usually qualify for surgical repair.

2)      Injectable augmentation of the lower third of the sternum can be easily and successfully done with Kryptonite Bone Cement. Its firm adherence to the sternal bone and its high impact resistance make it a good material for use in the chest.

3)       This injectable sternoplasty technique may also be useful for secondary revision of pectus excavatum repair in which the ideal contour has not been obtained.