Background: Facial asymmetry can occur from a wide variety of bone and soft tissue deficiencies or even, more uncommonly, overgrowths. (hypertrophy) One of the most common components of facial asymmetry occurs in the jawline of the lower face. Growth abnormalities emanate from the rami of the mandible, the meeting point of the vertical and horizontal bony limbs of the lower jaw. 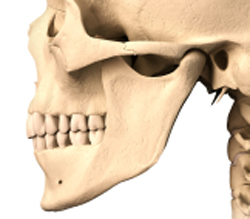 Developmental or growth abnormalities always alter the rami or jaw angle shape in a variety of dimensions. Given that the jaw angle actually has four dimensions (height, length, width and degree of angulation) even subtle changes in development can create visible facial changes. These would be seen in the amount of flaring of the jaw angles, evenness of the jawline as it comes forward and the centric position of the chin as seen from the direct frontal view.

In correction of lower facial asymmetry, the first decision is whether the chin has a midline position. If so then correction can focus on the jaw angle region exclusively. If not then the treatment plan must incorporate a combined jawline approach that augments the chin back to the jaw angle area.

Case Study: This 35 year-old female presented with concerns about asymmetry of her face. She felt that the left side of lower jaw was not the same size as her right side. It was flatter and did not have as sharp a jawline or angle shape. The remainder of her face was symmetric and without concerns.

Under general anesthesia, a width only (3mm) jaw angle implant was placed through an intraoral retromandibular incision. It was situated only over the bone with the intent of adding a small amount of jaw angle width and definition. 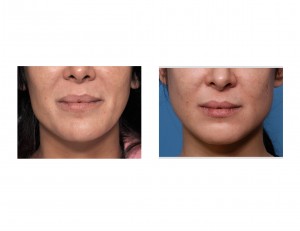 In using a jaw angle implant for correction of a lower facial asymmetry, it is unusual that only width expansion is needed without some vertical component. As most jaw angle deficiencies involve a component of retraction (vertical shortening) as well as lack of width development.

1) Jaw asymmetries frequently originate from the rami or angle regions and can affect both the vertical and horizontal dimensions of the lower third of the face.

3) Jaw angle implants are put in through an intraoral incision and different styles and sizes allow for either width expansion, vertical lengthening or both.