Background: The descent of gravity affects many face and body structures. The lower extremities are no exception. One of the leg places that tissue falls to is the knee. The knee acts like a stop for tissue descent due to the rigid attachments of the knee joint. It tends to ‘pile up’ above the patella also known as the kneecap. The broader upper surface of the kneecap and its attachments acts is where lower thigh tissues come to rest when the leg is extended.

Problematic knee rolls can not really be improved without direct excision. Any form of a thigh provides a tissue pull that is too distant. Even it were effective many patients with knees rolls do not need or want a thigh lift. The most common treatment approach for knee rolls is liposuction. Besides being ineffective it often, however, makes the knee rolls worse with the tissue deflation. Such knee skin does not have the ability to contract and become less with subcutaneous fat removal.

The knee lift is an uncommon procedure even though it is very effective at removing the knee rolls. The cancer with its use is the obvious visible scar concern. Since the knee must bend such a scar raises the additional concern that it will widen and become an equal aesthetic distraction as the knee rolls themselves. 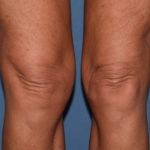 Case Study: This middle-aged female was bothered by the multiple skin rolls above her knees. Three to four rolls of skin encroached and hung over the top half of her patella with the leg in extension.

Preoperative markings for knee lifts must be done in both leg extension and flexion. Flexion will expand the crescent-shaped skin markings from that done in extension. This shows how much much more tension would be placed on any tissue excision done with the leg extended. The skin marking must then be reduced from what was marked in extension. Usually it will be about 2/3s for what was originally marked in extension to avoid the risk of postoperative wound separation when the knee is bent.

Under general anesthesia the crescent-shape tissue excision is done, removing the upper two-thirds of the preoperative markings. This ensures that the final closure line rests above the patella as well as avoids over resection. The tissue excision only goes down the subcutaneous fat level and stops short of the fascia. A two-layer closure is done with subcuticular skin suturing.

Knee lifts can be a successful treatment for  excessive skin rolls with very acceptable scarring. The key is proper scar line placement and avoiding over resection of tissue. this is dependent on preoperative markings with the knee in both extension and flexion and making the necessary adjustments.

1) Saggy knees develop a roll(s) of skin above the patella.

2) No form of a thigh lift can improve the distant knee location.

3) Knee lifts remove skin and subcutaneous fat above the knee which must be marked carefully to avoid over resection of tissue.