Fat injection buttock augmentation, better known as the Brazilian Butt Lift (BBL), has the unique quality of providing a dual body contouring benefit. The need for large amounts of fat obtained through liposuction creates an aesthetically desireable body contouring/thinning above the waistline. The more aggressive that liposuction is performed the more fat that is available to be injected and the greater the surrounding body shape reduction is.  Any buttock augmentation result will appear bigger if the waistline above it is smaller.

But no matter how much fat is obtained for a BBL, the result will ultimately depend on the percent of injected fat that survives. While there are numerous methods of fat harvest, preparation and injection, the optimal method for fat grafting to any body area remains up for debate.

Case Study: This 38 year-old male wanted a combination of buttock augmentation and contouring of multiple body areas. While she already had a wide buttocks the overall volume and projection was lacking. She previously had been through breast reduction and a tummy tuck by other surgeons previously with satisfactory results. 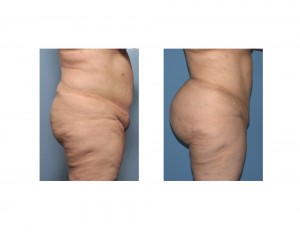 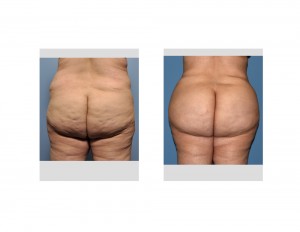 Under general anesthesia, she initially had extensive liposuction done on the full abdomen, flanks and back obtained 5,500cc of aspirated fat. The fat was concentrated down to 1,600cc by a filter and double wash method with Lactated Ringer’s solution. The in the prone position 800cc of fat was injected into each buttock and hip areas. 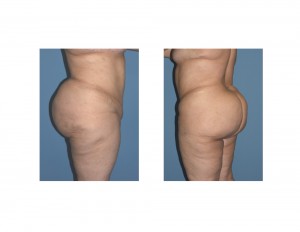 When seen at 15 months after surgery, her buttock augmentation result was impressive. While the body contouring effect above it was extremely helpful in enhancing the size of the buttocks, the volume of fat take created much of the BBL result seen. While there is no way to really estimate what volume of fat survived, it is fair to say that as much as 75% may have lived. At over one year after surgery, this retained buttock fat volume would be deemed permanent.

1) The success of the Brazilian Butt Lift depends on how much fat can be harvested and injected.

2) The take of fat in the Brazilian Butt Lift procedure can be 50% or higher for many patients.