Background: Gynecomastia is a well known condition of breast tissue enlargement that most commonly occurs in teenage and young males. Its incidence appears to be increasing in numbers based on surgeries performed for its correction although this may reflect increased awareness of surgical treatment and a fashion trend amongst young men with little tolerance for any areolar protrusion. While historically gynecomastia reduction was more frequently done for one-sided breast enlargement, it is more common today to do bilateral gynecomastia surgery. (perhaps due to the change in young male awareness of a pleasing chest appearance)

Gynecomastia reduction can be done using either liposuction removal or an open excisional approach. In some cases, both techniques are combined for optimal reduction. Which technique is needed can usually be determined before surgery by physical examination. Soft non-nodular gynecomastias can be removed by liposuction, firm masses which are almost right under the nipple-areolar complex which need to be cut out through an areolar incision. The patient’s description of their concerns is also helpful, it is just around the nipple or does it extend over a larger chest area?

The one thing that has become apparent in gynecomastia surgeries in my experience is that open excision is needed more times than not. Even in cases where the breast tissue appears soft there almost always is some nodular tissue right under the nipple. Failure to get this tissue will leave am areolar protrusion afterward that may result in the patient’s desire for revisional surgery for complete flattening. When the enlargement of the breast is mainly nodular, liposuction is not going to be effective at all. 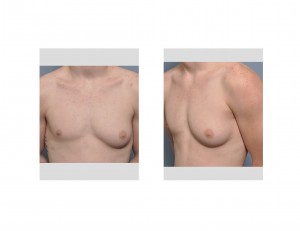 Case Study: This 20 year-old college student had a unilateral left breast enlargement since he was an early teenager. Contrary to earlier medical opinions, it never resolved on its own. While the breast development was significant (a true B-cup), he never underwent surgery in high school due to his active participation in sports year round. While it always bothered him tremendously, he lived with it and covered it up as much as possible. Now that he was in college, he no longer did any organized athletic activities,m so he had the time to finally treat his gynecomastia. 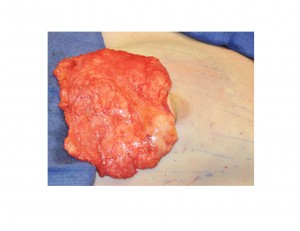 Physical examination before surgery showed a remarkably-sized breast mound for a male that felt fairly firm but without any palpable nodules. Under general anesthesia, his gynecomastia was initially treated by liposuction with minimal fat extracted. It became apparent that much of the breast mound was a large fibrotic mass through which the liposuction cannula would not penetrate. Then through a lower areolar incision, the entire mass was excised using a facelift scissor technique. The large mass was able to be delivered in one large piece through this small 2 cm incision. This produced a complete and immediate resolution to his entire breast mound enlargement. 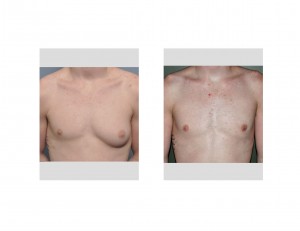 After surgery, a drain was kept in place for three days and then removed. When seen at three weeks after surgery, no fluid accumulation had occurred and the chest was completely flat and matched the opposite side. No areolar inversion was seen. Pathology of the removed specimen showed benign breast tissue. 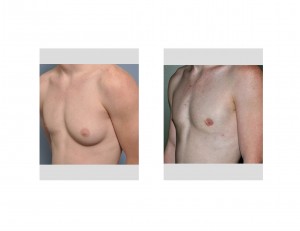 This case represents an uncommon form of gynecomastia in which the entire breast mound was one large fibrous tumor. Removal of it produced a dramatic one-stage cure without fluid accumulation and good skin retraction back down onto the chest wall.

1)      Large unilateral breast development in young males may represent a single solid tumor rather than simple breast tissue hypertrophy that makes up most gynecomastias.

3)      Excision of even very large solid gynecomastias can be done through a small areolar incision without the need for visible scars on the chest skin.