Background: Solar lentigines, also called age spots and liver spots, are brown colored skin patches that can appear anywhere on the face and body. They most commonly appear on those skin areas that have a long history of sun exposure. As a result, these brown spots usually do not appear until age 40 and older although they can appear in younger people as well. Brown spots vary in size and depth of color and can often be seen on the face given that it is a highly sun exposed area.

While brown spots may appear ominous for skin cancer, they are harmless and are treated for their unsightly aesthetic appearance. They occur as the result of concentrations of melanin triggered by the sun’s ultraviolet radiation waves. Thus they are focused areas of hyperpigmentation. They are a wide variety of hyperpigmentation treatments for brown spots including lightening by topical bleaching creams (e.g., hydroquinone), chemical peel exfoliators (salicyclic and glycolic acids), and intense pulsed light (IPL) therapies.

But not all brown spots come off with these treatments and, even if they have a positive effect, take time to work and often multiple treatments are needed. Some very dark brown spots or those patients with a large number of them may consider laser resurfacing to create a more immediate and complete effect. As much of the hyperpigmentation lies in the deeper layers of the epithelium, its removal is assured of making a significant reduction in their appearance.

Case Study: This 55 year-old female had developed a large number of brown spots all over her face. She was a heavy sun bather in your youth and never wore any sun protection. Her brown spots continued to develop and get darker as she aged to the point that she wore heavy makeup to hide them. She had tried many lightening creams and IPL treatments but their effects were minimal. 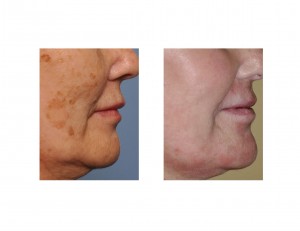 Under general anesthesia, a full face ablative laser resurfacing was done. Only a first pass  laser treatment was needed as when the epithelium was removed, all of the brown spots came off with it. Light antibiotic ointment was used for dressing. 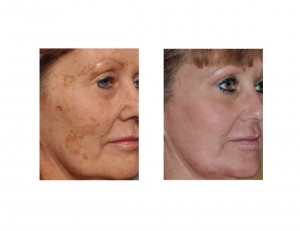 When seen one month after the procedure, all of her brown spots remained gone. It is now critically important that she wear sun protection at all times and avoid even moderate sun exposure as some recurrence of them or new areas will develop if she does not.

1) Brown spots are benign sun-related areas of hyperpigmentation that commonly occur in patches on the face.

2) Facial brown spots are typically and effectively treated by a variety of external therapies design to reduce and fade hyperpigmentation.

3) Refractory facial brown spots that are present in large numbers can be removed by ablative laser resurfacing that removes the top layer of the skin.