Background: Lip augmentations are very popular and are most commonly done with the use of injectable fillers. But not every smaller lip can be satisfactorily augmented by fillers alone and, even when a satisfactory result is achieved, women may eventually tire of the need for repeated injection sessions and their cost. 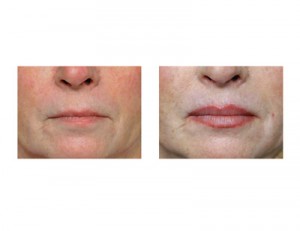 A lip advancement is one of the three surgical lip augmentation options which include lip lifts, lip advancements and lip implants. The lip or vermilion advancement procedure is the most effective lip augmentation procedure because it does what ultimately makes lips permanently bigger…it changes the vermilion or pink part of the lip to have more vertical exposure. And it does so from one mouth corner to the other which is what differentiates it from the lip lift which only changes the central part of the upper lift. The lip advancement can be done equally well on the lower lip as well as the upper lip.

The one disadvantage to the lip advancement is that it creates its powerful effect at the expense of a fine line scar at the vermilion-cutaneous border. These lip advancement scars can be very minute and acceptable in most cases. But there is very little tolerance for even the smallest asymmetries in the shape of the lip particularly in the cupid’s bow area.

Case Study: This 40 year-old female has a prior upper and lower lip advancement  from another surgeon that turned out to have significant lip asymmetries. The cupid’s bow was oriented to the left of the midline and the height of the lower lip vermilion was very different between the two sides. This gave the lips a very unnatural and twisted appearance. 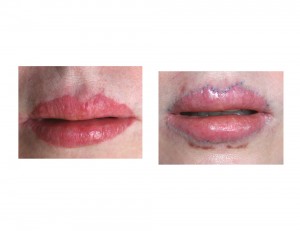 Under local anesthesia in the office, new lip vermilion edges were marked to realign the lips shape. New skin areas were cut out and the vermilion edges realigned. Her postoperative result showed substantial improvement but healed with some minor scar hypertrophy at the peak of the left cupid’s bow and along the outer thirds of the right lower lip. 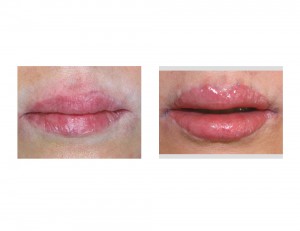 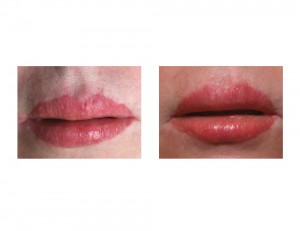 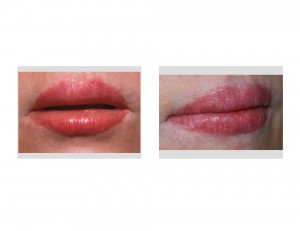 While the concept of lip advancements is simple, its execution requires careful preoperative markings, precise skin cutouts and a meticulous closure. The very visible presence of the lips on the face make any amount of asymmetry or hypertrophic scarring very apparent. Revisions of lip advancement problems usually led to a much improved and more symmetric outcome.

1) Lip advancements are technically precise procedures that must be measured before surgery and technically executed carefully.

3) It may take more than one revision to optimize lip shape and scar outcomes from adverse lip advancement problems.