Background: There are numerous features of a shapely buttocks. Short of a nipple-areolar complex, the buttocks share many of the same physical components of the female breast. Ideally it is an identifiable mound that projects outward away from the lower back and upper posterior thigh. While the upper pole is a smooth sloping transition from the back, the lower pole of the buttocks should have a more defined separation of the thigh known as the infragluteal crease.

Like the lower breast fold or inframammary crease, the infragluteal fold is a defined attachment of the skin to the underlying gluteal muscle.. It helps create the lower buttock shape and separates it from the back of the leg. It’s presence is caused by fibrous attachments of the dermis of the skin to the muscle fascia. Any disruption of the infragluteal crease results in a saggy buttocks or buttock ptosis.

Case Study: This 49 year-old female wanted to improve her saggy buttocks. She was an ultra-thin middle-aged female that had little subcutaneous fat throughout her body. Her buttocks were completely flat with little volume and folds of hanging skin over the lower buttocks and the upper posterior thigh. There was no discernible infraguteal crease. It appeared that her loss of buttock volume was just part of aging of an historically very thin person. 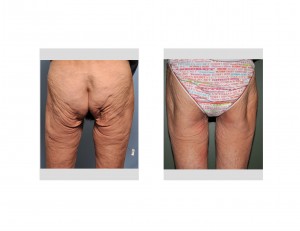 Under general anesthesia, a large curved elliptical excision of skin was done on both lower buttocks in the prone position. The orientation of this skin excision was both above and below where the infraguteal crease was determined to be placed. The wound was closed by suturing the dermis of the skin flaps down to the muscle fascia from the inner aspect from near the rectum out to the outer thigh.  Subcuticular suturing was then done for the final skin closure. Glued on tapes were her only dressing. 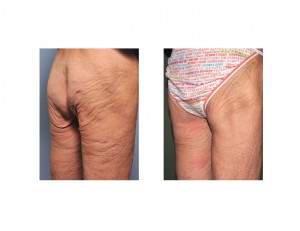 She had uneventful recovery and no wound healing problems. To reduce the potential risk of any wound separation, she avoided any exercise for a month after surgery as well as bending at the waist over 90 degrees as much as possible. All folds of unsightly skin were removed and an infragluteal line was created. Due to lack of any buttock volume, a more defined crease could not be obtained.

A buttock tuck (lower buttock lift) is a very effective surgery for remaking the infraguteal fold and creating a buttock-thigh demarcation. It has little after surgery discomfort but does not require avoiding stretching (no exercise) across the suture line for 3 to 4 weeks after surgery The resultant scar heals well and, when well placed, is barely detectable.

1) A shapely buttocks, regardless of its size, has an infragluteal crease that separates the buttocks from the posterior thigh.