Background:  Buttock enhancement has become a popular contemporary procedure, offering improvements to a body part that historically has been thought of as having few choices. People have numerous aesthetic buttock concerns including size, shape and tone/firmness issues. Buttock augmentation with fat injections (aka Brazilian Butt Lift) is most well known today as it has become fashionable to have a rounder fuller buttock, particularly amongst Hispanic and African-Americans.

But not all buttock concerns are about size. The saggy buttock  is an unflattering shape that is associated with being flat and having skin that has slide off of the gluteal muscle onto the posterior thigh area. This happens as the buttock is affected by weight loss and aging. Weight loss causes the skin to fall as the volume support vanishes with fat absorption. Aging has its own  volume loss but the skin sags as it loses elasticity after having been exposed to repetitive stretching over a lifetime.

One important aesthetic feature of the buttock is the inferior gluteal fold. Like the inframammary fold in the breast, it serves as the transition point between two anatomic structures…the buttock and the thigh. It exists because there are attachments from the underside of the skin along the crease to the muscle below. This allows the more fibrofatty tissue to remain over the buttock where it is needed for padding support. Loss of the inferior gluteal fold attachments allows the buttock skin to sag down onto the thighs. 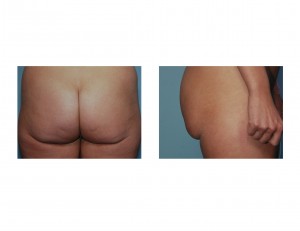 Case Study: This 35 year-old female wanted to improve the shape of her buttocks. She had adequate volume but did not like the lower end of her buttocks because it was ‘saggy’. She wanted the bottom part to tuck in more and have a well-defined crease. She was willing to accept a scar for that improvement. 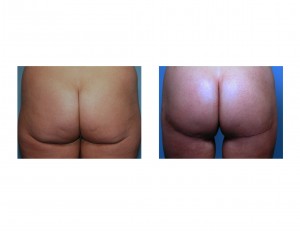 Under general anesthesia she underwent a lower buttock lift using an ellipitical excision technique. The underside of the skin was sewn to the fascia overlying the gluteal muscle to help create a well-defined crease and invert the incisional closure. All sutures were under the skin in a subcuticular fashion. Her only dressing afterward was surgical tapes that were glued over the incision line. This was an outpatient procedure with few restrictions afterward other than avoiding strenuous activities that involved bending over greater than 90 degrees at the waistline for three to four weeks after surgery. 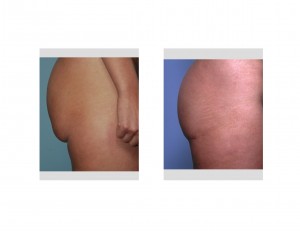 She had an uneventful recovery with no wound separation problems. She had fine line scars along the natural inferior gluteal crease that faded to white by six months after surgery. In profile she had a well-defined break at the crease between the buttocks and the posterior thigh.

Of the available buttock enhancement procedures, the lower buttock lift is the least commonly performed. While it is the one buttock procedure that has the longest history in plastic surgery, it is less desired than buttock augmentation that provides volume by an implant or fat injections. But for the patient who has effacement of their inferior gluteal fold and a saggy lower buttocks, this simple lift procedure can provide a significant improvement. It can also be performed in conjunction with either of the buttock augmentation procedures since its surgery site is away from where implants or fat are placed.

1)      A common buttock deformity is ptosis or the sagging buttock due to skin falling over the gluteal  crease or descent of the gluteal crease itself.

2)      Excision of loose and overhanging skin can recreate the inferior gluteal fold and create a clear transition between the buttocks and the posterior thigh.

3)      Inferior gluteoplasty or lower buttock lift requires a minimal recovery other than avoiding severe stretching of the incision line.