Background: Aging causes loose skin to develop and this is particularly evident around joints such as the knee. The repetitive extension and flexion over a lifetime will inevitably cause rolls of skin to develop on the north side of the joint where the skin is the most flexible. This has led to the need for procedures such as knee lifts to be requested.

While the elbow is a smaller joint, it is not immune to the same type of skin rolls that develop just above the joint, seen exclusively in extension. Because it is exposed in short sleeves, an elbow lift is also a procedure that will occasionally be requested by women to remove the unsightly skin rolls.

The key is  elbow and knee lifts is that the amount of skin that can be safely removed is less than one would think. It is critical to make the patient first with the arm or knee fully extended using the pinch test. Then the joint is placed in 90 degree flexion and re-marked, which will always be less than the original excisions outline. By downsizing the amount of skin removal from that seen in extension, the risk if postoperative would dehiscence is eliminated and a better scar outcome is assured. 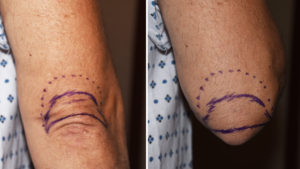 Case Study: This older male was bothered by the rolls of skin above his elbows. Two sets of marks were made in both extension and flexion.

In surgery they amount of excision was even slightly less than the flexion mark  and was tested in both flexion and extension to ensure there was not undue tension on the closure.

Three months followup showed red elbow scars as expected, which will face with more time,  but they remained narrow with no signs of widening. Comparing his before and after pictures with elbow in extension showed removal of most of the unsightly skin rolls.

1) Elbow lifts evolve the judicious removal of skin from just above the elbow joint.

2) Marking the patient in flexion and extension is critical to not removing too much skin and developing a wide hypertrophic scar.

3) While most elbow lifts are done in women, an occasional male will request the procedure as well.