The occurrence of prominent temporal arteries in men is the result of numerous classic triggers. Anything that causes the vessel to have increased blood flow through arterial wall dilatation will make them appear more prominent. Exercise and increased body are two obvious reasons for the size of the vessel to grow. But alcohol and certain medications can also have a dilation effect. Once triggered it can takes hours for the temporal vessel prominence to subside.

While some men have only episodic appearance of their temporal arteries, others have a persistence prominence that only changes in how large the vessels look. Their persistent presence, as irregular worm shapes extending from the temples up into the forehead, is the reason some men seek treatment. The only definitive treatment for prominent temporal arteries is ligation but not just a single point ligation will work.

Case Study: This middle-aged male had prominent temporal arteries on both sides with the right being more prominent than that of the left. 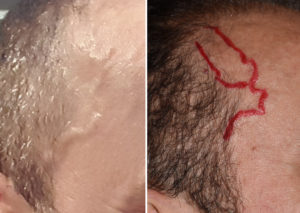 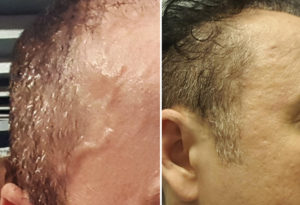 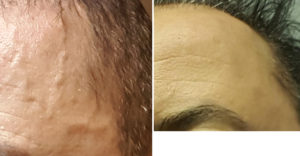 The need for multipoint ligation is to eliminate not only obvious inflow into the vessels but also eliminate any change of back flow into them. Branch point ligations are needed to reduce the risk of missing any feeders into the system that arise from deeper vessels that are not seen externally.

This patient’s success prompted a review of my temporal artery ligation experience over the past five years and includes the following clinical results:

27 patients, all male (I have never had a female even inquire about it)

This clinical experience shows that good improvement is consistently achieved in reducing temporal vessel prominence with a low incidence for the need of secondary ligations due to either recurrences or inadequate ligation points.

2) To ensure the best reduction in the size of the prominent temporal arteries a multipoint ligation technique is needed.

3) The skin entrance sites heal in a virtual scarless manner even when on the forehead.