Background: Brow bone reduction is one of the more recognized forms of forehead reshaping. Outside of tumor, fracture or asymmetry issues, brow bone reduction is done in two main patient populations. Male patients seek treatment for very strong brow bones to eliminate the ‘Neanderthal’ look. The transgender male to female patient seeks to feminize their upper facial appearance by softening and rounding their forehead shape.

While the removal of the anterior table of the sinus bone and is setback seems responsible for the brow reduction result, this is an overlying simplistic view. Numerous accompanying bone reshaping procedures are needed. These include the reduction of the surrounding edges of the forehead/brow bone that remains, the midline bony septum between the two calfs of the frontal sinus, the frontonasal junction as well as the thinning out/flattening of the removed bone segment. This maneuvers allow the straightened bone flap to set back into the frontal sinus.

Case Study: This 60 year-old male to female transgender patient was to undergo a variety of  facial feminization procedures of which brow bone reduction was but one of them. Other concomitant forehead procedures included a hairline advancement and brow lift.

Under general anesthesia and through a frontal hairline incision extending down into he temporal region, the forehead and brow bones were exposed. A reciprocating saw was used to cut off the anterior table of the frontal sinus flush with the surrounding forehead bone. The outer perimeter of bone, the septum and the frontonasal junction was also reduced. The removed bone flap was made straighter by thinning its inner and outer surfaces. It was placed back over the frontal sinus using 1.0mm micrplate and screws. The outer half of the brow bones was then reduced by burring to change a moe square lower forehead shape into a rounder one.

Microplate bone flap fixation provides the lowest hardware profile and leas than one millimeter. It is nit capable of being felt from the outside through the skin as a result. 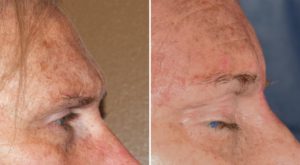 The immediate intraoperative effects of this brow bone reduction technique could be readily appreciated. 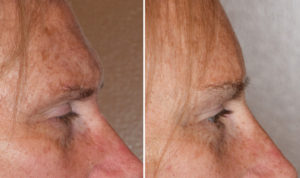 1) The setback bone flap technique in brow bone reduction is the most effective method.

2)  Some form of plate fiction is usually needed to secure the bone flap of which 1.0mm microplane fixation is the smallest.

3) Setting the brow bone flap back into position requires a reduction of the surrounding perimeter of bone and the midline sinus septum of bone.