Background:The earliest and most recognizeable area of facial aging is around the eyes. Due to the near constant motion of the eyelids and surrounding sphinteric-like orbicuralis muscle action, redundant skin and wrinkles develops on both eyelids. With enough time and aging, the extra skin becomes significant enough to hang down onto the lashes of the upper eyelids and rolls of extra skin hang below the lower eyelids often with protruding fat.

The traditional approach to eyelid aging is blepharoplasty surgery. This highly effective procedure uses wide excision of skin with the final closure/scar lying in a natural eyelid crease in the upper eyelid and just below the lashes on the lower eyelid. This skin removal creates exposure for elimination of herniated fat pads and tightening of redundant or sagging muscle if needed. Complete recovery usually takes about two or three full weeks until all vestiges of swelling and bruising are gone.

While aging of the eye area begins as early as the mid- to late 30s, a traditional blepharoplasty is too invasive and extensive procedure for the amount of aging present. Thus, while many people are bothered by these early eye aging eye issues they delay surgical improvement until they are suitable for amore complete blepharoplasty. But like the limited or mini- versions of facelifts that have become popular in the past decade, similar scaled-down mini-blepharoplasty operations also exist. In the spirit of matching the solution to the problem, these smaller eyelid tucks remove less skin and rely on skin resurfacing to eliminate some of the wrinkles. As a result, they have a fairly quick recovery which is usually half that of a traditional blepharoplasty. 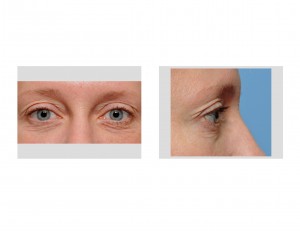 Case Study: This 38 year-old female from Indianapolis Indiana was bothered by her tired eye appearance. Even though she was relatively young, she had a lot of skin rolls on her eyelids and wrinkles on the lower eyelid. These had developed in just the past five years and she felt it was due to a lot of stress in her life. Her eyes certainly did not match her age or the rest of her physical appearance. Creepy loose skin was evident but there was no herniated eye fat or bags present. 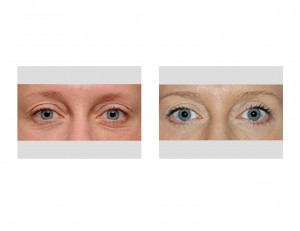 Under general anesthesia, her eyelids were treated by a minimal skin excision technique known as a pinch blepharoplasty. A special instrument was used to pinch up the extra skin along the defined upper eyelid skin crease and just below the lashline of the lower eyelid. This pinch amounted to 6 to 7mms of skin in the upper eyelid and 3 to 4mms of skin on the lower eyelid.. The pinched skin was then removed with scissors and closed with a small running dissolveable suture. The lower eyelid was then treated by a chemical peel of 35% TCA until a good frost was obtained. 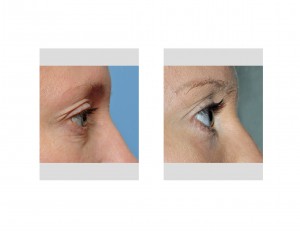 She had no dressings afterward and only applied a thin layer of antibiotic ointment to the incision lines and peeled skin for one week. She had minimal bruising and swelling that was largely gone by the 10th day after surgery. Her tired eye appearance was eliminated and she easily appeared five to seven years younger.

The technique of the pinch or mini blepharoplasty is based on the principles of limited tissue removal and no skin undermining. This is why bruising does not occur, or at least very little, as the blood supply to the skin is compressed by the instrument prior to scissor removal. This is also why it is safe to treat the lower eyelid skin by chemical or laser resurfacing as it has an uncompromised blood supply.

1) Facial aging first appears on the eyelids with the development of loose skin and wrinkles, creating a tired appearance.

2) Blepharoplasty removes loose skin and in older aging eyesthat may be a considerable amount of skin rolls and herniated.

3) In younger patients with early onset aging, more limited pinch blepharoplasties can be performed with lower eyelid chemical peels for a less invasive procedure that better matches the amount of aging present and offers a rapid recovery.