Background: Familial multiple lipomatosis (FLM) is a well known condition that is associated with the lifelong development of lipomatous tumors. These lipomas occur almost exclusively on the trunk and extremities with the head, neck and shoulders usually being spared. It has been identified as an autosomal dominant condition that has been associated with chromosome 12q15.

The typical lipoma has a surrounding capsule and appears as a solitary lesion of various sizes. But the lipomas that occur in FLM are multiple, are often in clusters or a chain and have been described as more rubbery in feel. While most are asymptomatic, their location and size often make them painful.

The surgical treatment of the lipomas in FLM is excision. These excisions are usually done periodically throughout the patient’s life based on those that are associated with pain or significant cosmetic deformity. While the excisions may cure those that are removed, new lipomas will likely develop in contiguous locations in the future.

Case Study: This 60 year-old male with known FLM presented for a more comprehensive approach to his lipoma excisions. He had been through multiple lipoma excisions up to this point in life but were always limited to a handful at a time. 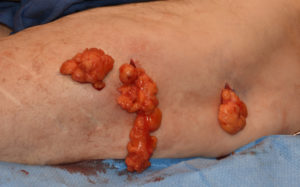 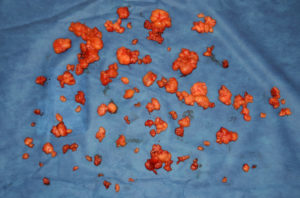 Under general anesthesia, 85 lesions sites of the upper arms, stomach and thighs were treated through an ‘expressive excision’ technique. This is where the skin incision is relatively small through which blunt undermining around the lipoma(s) is done. Then manual pressure is applied to basically squeeze the lipomas out through the small incision. With this method over 235 lipomas were removed over a three hour operation.

While a comprehensive approach to multiple lipomas requires a lot of incisions and resultant scars, the expressive excision technique keeps the length of each incision relatively small with a very low risk of infection or bleeding.