Background: The lower third of the face is a very important component of the male face. Whether one choices to call it more attractive or masculine, a well defined jawline creates an essential aesthetic feature of the lower face in a man. While fashion and beauty ideals change across various cultures and periods of time, there has never been a time in history where a weak or short jawline in a man was viewed as desirous.

There are numerous methods of jawline augmentation, all of which have a role to play in male facial enhancement. Provided one has a stable and well interdigitated bite (occlusion), most augmentation methods involve some form of implant placement. There is a role for a sliding genioplasty in more severe underdevelopment of the jaw but it is far less frequently done than that of implants.

Jaw implant augmentation consists of either using standard implant shapes and sizes or having a custom jaw implant made. The decision between these two choices comes down to which approach can best create the desired aesthetic result. Or to put it another way…can standard chin and jaw angle implants suffice? Does one have to go as far as having a custom jaw implant made? That answer depends on two dimensional issues; 1) Do the desired chin and jaw angle changes fall within what standard implant shapes can achieve and 2) Does one want a smooth jawline connection between the chin and jaw angle area? 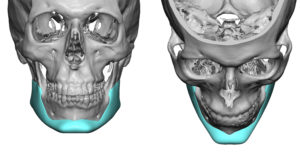 Case Study: This 35 year-old male wanted a more defined jawline but he did not want it to look too big or unnatural. In essence he did not want it to be obvious that he had surgery. Thus a relatively modest custom jaw implant was designed to make his chin more square and provide some increased angularity to the jaw angles.

Under general anesthesia the custom jawline implant was placed through a three-incision technique. (anterior submental skin and posterior bilateral intraoral mucosal incisions) The implant was placed from front to back through a subperiosteal tunnel under the intervening mental nerves. The one-piece wrap around implant was secured at the chin and jaw angles by a single 1.5mm microscrew at each location.

Six weeks later all of his swelling had resolved and most of the final result could be appreciated. His jawline had a greater chin prominence and a stronger jaw angles. But it looks perfectly natural and still fits his face well.

A custom jawline implant does not have to be big to be effective. Small to modest sized jaw implants can produce a nice improvement to the lower face

2) A more stronger and more defined jawline does not always mean that it is substantially bigger, just more evident chin and jaw angle areas.

3) A custom jawline implant offers the only jawline augmentation procedure that creates a stronger chin and jaw angles with a smooth connection between them.