Background: Many women who are to undergo breast augmentation surgery have asymmetric breasts. These asymmetries may be in breast mound size, breast mound shape, amounts of sagging and the nipple position. Preoperative education about how breast implants will impact these asymmetries is of critical importance as breast implants alone will not correct many breast asymmetries. In some cases they make even make them worse. This has led to the well worn phrase in breast augmentation surgery of…’they are sisters, not twins’.

Almost all differences between two breasts, however, are reflected in some degree with the position and shape of the nipple. Nipple size differences can exist but the most important and visually distracting nipple issue is that of a horizontal discrepancy. When one nipple sits lower than the other nipple based on a horizontal line drawn between the two, this is a critical preoperative diagnosis to make. It usually is the result of one breast having a little more sag than the other one and women often state this was the primary suckling breast. This diagnosis is important as the placing of breast implants will always increase any horizontal nipple discrepancy.

Managing a horizontal nipple asymmetry is almost always done through a nipple lift, also called a superior areolar mastopexy. In reality it is just a lift of the superior margin of the areola and has no breast lifting capabioity as suggested by the mastopexy name. This is a simple procedure of skin removal and areolar margin adjustment that has no detrimental effect on nipple sensation or prolongs the recovery from breast augmentation surgery.

Case Study: This 46 year-old Asian female presented for breast augmentation surgery. She has lifelong small breasts of B cup size and wanted to be a fuller C cup. On examination her right breast had more sag and an appreciable lower upper margin of the areola with a 12mms discrepancy. 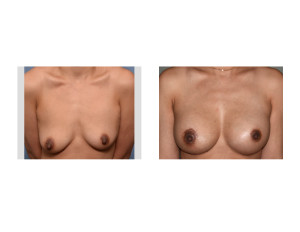 During her breast augmentation surgery, 300cc high profile round smooth silicone gel breast implants were placed through inframammary incisions. At the same time a superior crescent of skin was removed above the right areolar to better match the horizontal levels of the nipples. 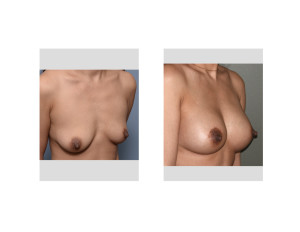 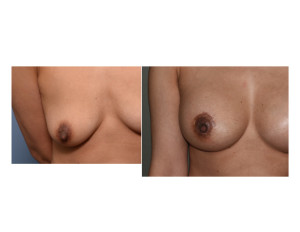 Her postoperative results show larger breasts that appear more symmetric in both size and nipple position. Even though she was of Asian origin, her areolar scar shows on signs of hypertrophy or hyper pigmentation afterwards.

A superior nipple lift is a simple and effective method for improving breast asymmetry in some women undergoing breast augmentation surgery. The preoperative diagnosis of horizontal nipple asymmetry is critical and one that even some women are not aware that they have. Some women may defer to wait after surgery to see whether they want to do it or not. And that is easily done under local anesthesia in the office should they so decide. But bringing it to their attention before surgery and offering the nipple lift option, either during their breast augmentation surgery or after in the office, is sound pre surgical education.

3) A nipple lift is not a breast lift and only changes the upper location of the areolar margin.