The assessment of the horizontal nipple position in the preoperative breast augmentation consult is critical.  The position of the nipple on the breast mound draws one’s eye to it. As the breast mound increases in size with implants, almost always the differences in the horizontal nipple levels will become magnified. While a women may not have noticed that their nipples were at different levels before surgery, one can be assured that they will notice after surgery when that discrepancy becomes more noticeable. 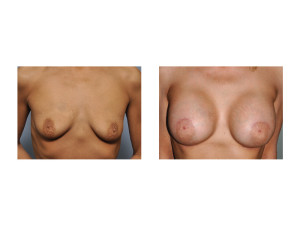 The best role that the nipple lift, also known as the superior crescent mastopexy (SCM), plays is in the correction of horizontal nipple differences in breast augmentation surgery. The nipple lift is just that…it lifts the superior level of the nipple up to a centimeter. It is not a breast lift even in the most minor of ways. It can help even out minor horizontal nipple level differences.

Case Study: This 32 year old petite female wanted breast implants to improve her naturally smaller breasts. She had a slight breast asymmetry both in the mounds and in the horizontal level of her nipples. It was decided to perform a nipple lift on the lower side at the time of her breast augmentation. 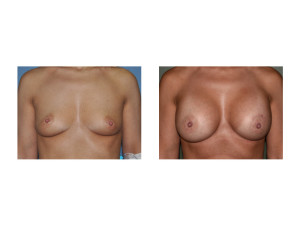 Under general anesthesia she had Sientra silicone gel gummy bear breast implants of 300cc size placed through inframammary incisions. The left breast had a 10mm nipple lift done through an excision of a superior crescent of skin. 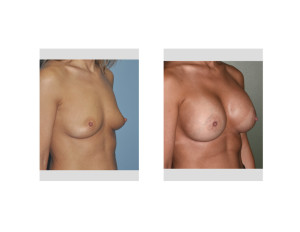 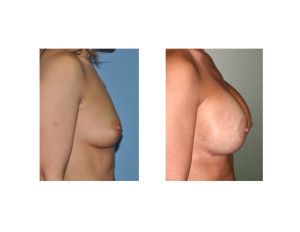 Her postoperative results showed good symmetry of her breast mounds as well as an even horizontal nipple level. The fine line superior areolar scar was still visible at 6 weeks after surgery but will go on to fade by 3 to 4 months after surgery.

The superior nipple lift is a small but valuable breast procedure that can correct one cause of breast asymmetry. If in doubt of its need before surgery it can be delayed until the breast mounds have settled and performed as an office procedure done under local anesthesia.

2) Breast implants will most likely magnify a horizontal nipple asymmetry, not even it out.

3) A superior crescent nipple lift at the time of breast augmentation can ensure that the horizontal levels of the nipple improve as the mounds are made bigger.