Background: Otoplasty is a well known cosmetic ear surgery that treats ears that stick out too far. It is done by either creating an increased cartilage fold, removing or scoring (weakening) of the cartilage or a combination of both techniques. The goal is to change an auriculocephalic angle to a more acceptable one, bringing the ear closer to the side of the head.

In doing an otoplasty and setting the ear back, there is no precise formula in creating the new ear angle. It is done by the surgeon’s artistic eye and experience in knowing what is an acceptable ear position. This makes doing an otoplasty as much an art as it is a science. This also leads to the most common ear problem after otoplasty…over-or undercorrection of the ear position.

Undercorrection of an otoplasty is the easiest problem to fix. The ear can be pulled back further through additional suture placement. The more difficult problem is when the ear is  over corrected. If seen early after surgery before considerable scar contracture has occurred and cartilage memory has been changed, sutures can be released and a scar release performed. But if done long after healing has occurred, scar and suture release is not going to work.

Case Study: This 30 year old male had an otoplasty ten years ago that left him with a telephone ear deformity. The central outer rim of the ear (helical rim) cold not be seen. It was located behind the antihelical fold. The upper and lower helical rim was more visible. 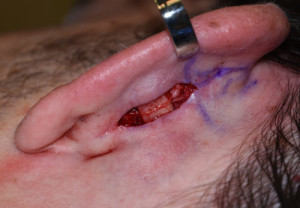 Under local anesthesia his previous incisions were opened on the central part of his ear on the back side. Scar tissue and old sutures were excised. The outer ear cartilage was scored and released so that it could be elevated. Using an irradiated piece of cadaver bone, a vertical strut was fashioned and placed on the back of the ear to hold it out. It was  sutured onto the cartilage on the back of the ear. 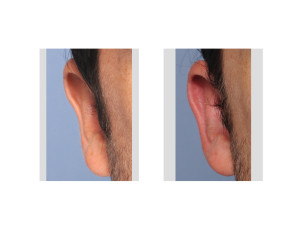 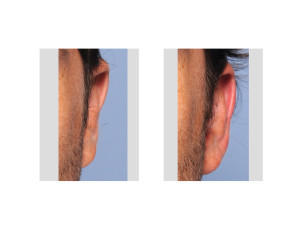 The use of an interpositional graft is the key to a successful otoplasty reversal. A strong support is needed to push and hold the ear back out. Scar release and suture release/removal is not going to make the ear jump out and increase its auriculocephalic angle. There may be other types of grafts that can work but homologous or cadaveric bone grafts not only avoids a donor harvest site but offers long-term stability.

1) Overcorrection of an otoplasty often presents as the center portion of the rim of the ear being pulled back too far, creating the classic telephone ear deformity.

2) Correction of the over done otoplasty requires cartilage release and an interpositional graft to hold it back out and prevent relapse.