Background: Augmentation of the male chest is done most successfully by pectoral implants. Fat injections rarely provides a pleasing aesthetic outcome because its effect is a softer and more ill-defined chest shape look. This undesired aesthetic effect combined with the capability of fat to grow with weight gain makes  fat transfer a less than ideal treatment method.

But like breast implants in women, the success of pectoral implants in men depends on proper shape and thickness of the implant. The chest should be measured before surgery based in an outline of the pectoral muscle. This creates the footprint or shape of the implant needed. Estimating how much projection is desired is a bit harder from an aesthetic standpoint but for the most part an even thickness is usually desired throughout the submuscular implant site.

Older men and men with who have undergone some weight loss often pose additional issues of lateral chest wall soft tissue excesses. This could be excessive fullness due to fat and/or skin sagging. A good projecting pectoral implant will help improve some of the loose skin but additional techniques of liposuction and/or an axillary skin lift are helpful adjunctive techniques.

Case Study: This older male had a prior history of multiple pectoral implants, none of which achieved a satisfactory result. Besides lack of projection, he had fullness and tissue sag on the lateral chest wall. His current implants were very wide going several centimeters beyond the lateral pectoral muscle border and there was inadequate projection by the patient’s desires. 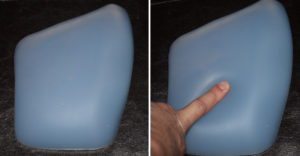 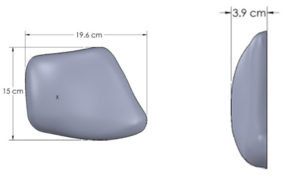 Under general anesthesia and through his existing low axillary scars, his current pectoral implants were removed and replaced with large high profile (3.9 cm) pectoral implants with less width and mire upper pole fullness.. They were also of an extra soft durometer. Lateral pocket plication was done to close down the implant pocket back to the lateral pectoral muscle border. At the same time a combination of lateral pectoral triangle liposuction with an axillary lift was performed.

His immediate result (one day after surgery) showed a much more pleasing chest shape than had more projection, less chest width and minimal loose skin on the sides.

It is important to remember in pectoral implants that it is a muscular augmentation. This the width of the implant should stay within the confines of the muscle margins. This is different than a breast implant in a female where to achieve a mound this requires having the implant go beyond the lateral muscle border in most cases. Increased projection improves the loose skin on the side of the chest wall which can also be improved by liposuction and /or an axillary skin lift.

1) Pectoral implants are prone to having an inadequate size or shape to meet the patient’s expectations.

2) Older men are prone to lateral or pectoral triangle fullness which requires a dual implant and lift approach for improvement.

3) The basic principle of pectoral implants should be perceived as ‘high and tight’ when selecting an implant stye and size.