Background: The scalp is not prone to a lot of different congenital conditions. But one congenital abnormality that does occur is that of cutis aplasia. This is a condition where there is an absence of skin and deeper structures underneath it including bone in some cases. While it can occur anywhere on the body, it commonly occurs on the scalp. In my experience I have seen it numerous times over the vertex of the skull and appears as circular patches.

While cutis aplasia can occur as part of numerous syndromes, its non-syndromic appearance  is that os isolated skin lesions. In some cases they appear at birth as open areas that go on to heal with a thin epithelial cover. In other cases the missing skin areas have already healed at birth.

Reconstruction of the scalp cutis aplasia involves lesion excision and scalp flap coverage. Because of the natural tightness of the scalp, which is like skin stretched over a large ball, either large rotation scalp flaps have to be raised or scalp tissue expansion used. 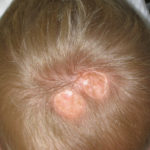 Case Study:  This young child was born with two open circular scalp areas that went on to heal with a thin epithelial cover. The underlying skull was intact.

Given the two large lesions on the scalp and the hair-bearing coverage needed, a first stage scalp expansion was done with two small expanders on each side of the lesions..That was followed by excision of both scalp lesions and primary closure by the ‘extra’ scalp tissue created by the scalp expansion. When seen several years later there was some scar widening as would be expected with skull growth.

A secondary scalp scar revision was performed with the application of Matristem particles in an effort to create minimal secondary scar widening.

3) Tissue expansion is one method to increase the availability of hair-bearing scalp without making long additional scats to raise rotational scalp flaps.