« Facts and Myths about Cellulite
Jaw Angle Augmentation for Females »

Background: Gynecomastia is a well-known male condition of breast enlargement. Most envision gynecomastia as that of a significant breast mound that may be fairly small to that of a mound more similar to that seen in the more mature female breast. But smaller size gynecomastia exist in equal numbers which can be just as bothersome to the younger male.

Breast enlargement relegated to just around the nipple area can be defined as areolar gynecomastia. Appearing as a ‘puffy nipple’, the development of a small areolar mass pushes it out beyond the plane of the surrounding chest skin. While minor compared to much larger gynecomastias, it can be of cosmetic concern as it can appear through t-shirts and is not consistent with our modern-age culture of the ‘Abercrombie Fitch’ male. A completely flat chest is what younger males desire today. In the aesthetically conscious young male, any degree of nipple protrusion can be bothersome. 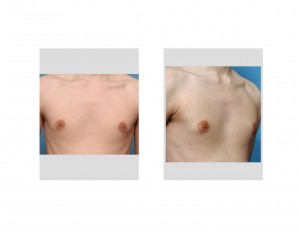 Case: This is a 21 year-old male who came in for treatment of his puffy nipples. On first glance, one may not see anything abnormal. But closer examination showed some nipple elevation on both sides of his chest. His overall chest appearance was not muscular but smooth and thin. In the perspective of the shape of his chest, one could appreciate why this small amount of areolar mass would be bothersome. His medical history was significant in that he had been treated with long-term low dose steroids due to congenital adrenal hyperplasia. This may have been the cause of his small gynecomastia. Also, he previously had liposuction surgery which did not significantly improve his chest concerns.

The treatment choices for any small form of gynecomastia is between liposuction versus open excision, or some combination of the two. Which choice is best depends on how the gynecomastia feels. If it is soft, liposuction (particularly laser liposuction or Smartlipo) can do a good job. If it feels hard or has a ‘mass-like’ feel, open excision will be more effective. It is tempting to think that one can beat up the hard areolar mass by liposuction cannulaes or laser probes and suction it out, but this approach will often be disappointing. 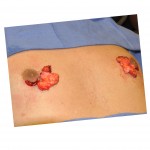 During his gynecomastic surgery, an open approach was done using a lower or inferior areolar incision. A very dense mass of tissue was encountered on each nipple and removed. The key to removing these areolar masses is to not overdo it. It is very easy to remove too much tissue and end up with a reverse problem, the inverted or indented nipple. At least 10 millimeters of tissue must be left on the underside of the nipple-areolar complex. And it is best not to completely expose the pectoralis fascia. Resection will usually go wider than the diameter of the areola. The incision is closed with dissolveable sutures under the skin, taped, and a compression chest wrap worn for a week. A small drain may or may not be used depending upon the size of the residual resection cavity. 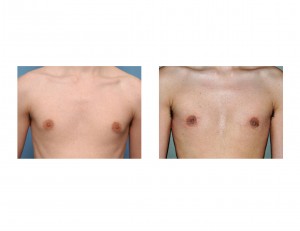 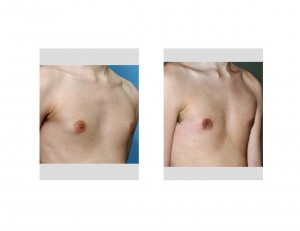 1)Areolar gynecomastias are small nipple protrusions that can be cosmetically disturbing, particularly in the younger male.

2) Despite their small size, they are usually not best reduced by liposuction due to their firm consistency. Open excision is more effective for getting out these silver-dollar sized masses.

3)The use of open excision for areolar gynecomastias creates no significant scarring and is no more invasive than liposuction. Overzealous tissue resection can result in nipple indentations and inversion.