Background: Gynecomastia, or male breast enlargement, occurs in a wide variety of forms and ages. While typically perceived as a condition that occurs in teens and young men as a reaction to elevated hormonal levels from puberty, gynecomastia occurs equally in older men as well. ‘Man boobs’ as they are often called can be an aesthetic affliction to any man at any age. 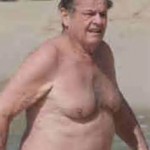 Older men can develop gynecomastia for a variety of reasons from weight gain, dropping testosterone levels (and elevated estrogen levels) and various medications. (e.g., propecia or testosterone supplements) Often the cause is multifactorial and weight gain is a common denominator. Many older men as their abdomens become bigger and rounder will develop a similar but smaller enlargement of their breasts as well.

The surgical treatment of gynecomastia consists of only two basic approaches, liposuction or open excision. In many gynecomastia reductions surgeries of all ages, a combination of open excision and liposuction is usually needed. But softer gynecomastias and those thayt have little evidence of any lumps or masses under the nipple will do well with liposuction alone. Many different types of liposuction can be used for gynecomastia surgery and will work equally well based on the practitioner’s skill and experience.

Case Study: This 54 year-old male came for liposuction of the chest, abdomen and flanks…the three classic liposuction areas for men. He had lost as much weight as he could through diet and exercise and had ‘hit the wall’. He needed a surgical boost to make a more significant change than we he could accomplish. His chest had a softer type of breast enlargement that had no hard lu 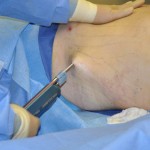 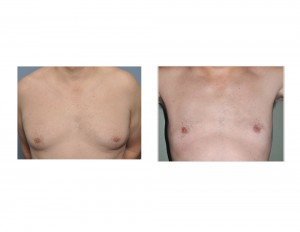 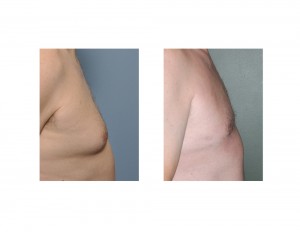 His six month postoperative results showed a much improved chest contour with no residual signs of his ‘man boobs’. He also had no nipple protrusion or residual puffy nipples.

For many older men with gradual onset gynecomastia, liposuction alone can be a very effective treatment. It is often combined with other body areas such as the abdomen and flanks which many men have problems with as well. Power-assisted liposuction aids in fat and/or breast tissue removal through its oscillating tip, lessening the workload on the surgeon.

1) Liposuction is the most common surgical method used for gynecomastia reduction.

2) Men that develop gynecomastia as they age or gain weight are more likely to have a softer less fibrous type of breast tissue.