Background:Changing the inherent shape of the African-American nose is one of the earliest forms of ethnic rhinoplasty in the U.S. The rhinoplasty goal is not to make it look like a Caucasian nose as this is both unnatural and often just ends up just creating an abnormal nose shape that does not fit the face. Rather the goal is to refine the nose, making it have more distinct components that enhance the face through in increased projection.

The African-American nose is an outer reflection of a shorter septal growth (limited tentpole effect) and an overall facial skeletal profile of bimaxillary protrusion. This results in short nasal bones which makes for a broader and more flat nasal bridge. In addition, the tip cartilages are more weak and have little arc near the dome, creating a wider and less projected tip with a short columellar skin segment. With a broader tip and an increased horizontal maxilla and pyriform aperture dimensions comes a nostril shape that is far wider than it is tall.

There is nothing new or innovative in the approach to the African-American nose. The well established principles of increasing tip projection, narrowing the nostrils and raising the height of the bridge are the basic maneuvers. How to increase the dorso-columellar projection of the nose requires either significant cartilage grafting or the use of a synthetic implant. Each has its own advantages and disadvantages. There is no question that a synthetic implant makes it easier to do and is appealing to a larger number of patients. It is not my preferred approach as some of risks with its use (infection, skin thinning and exposure) will eventually be seen long-term in some patients. (virtually none of which will be seen with cartilage grafting) 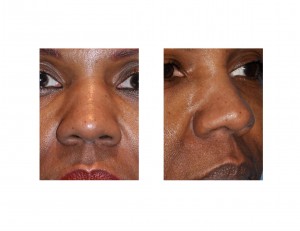 Case Study: This 45 year-old female wanted refinement in her nose. She specifically wanted a higher bridge, a more refined nasal tip and less flare to her nostrils. In discussing how to achieve these goals, she did not want to undergo a rib graft harvest for augmentation. She accepted the risks of a synthetic implant. 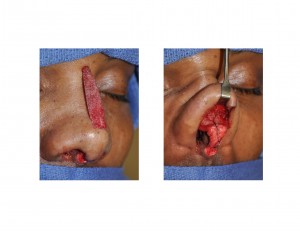 Under general anesthesia, an open rhinoplasty approach was done. A septal graft was harvested to use as a columellar strut. The nasal dorsum was built up using a small porous polyethylene nasal shell implant that was trimmed down to create 4mms of augmentation. It was placed from the top of the nasal bones down the tip being tucked under the dome cartilages. The lower alar cartilages were narrowed with sutures but no cephalic trim was done. A shield tip graft was placed.After columellar skin closure, the nostrils were slightly narrowed with skin excision from the sill area. 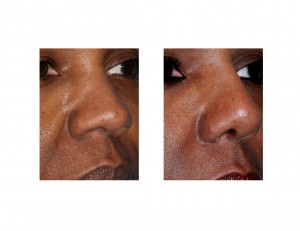 Her postoperative course was typical for most rhinoplasties with splint/tape removal at one week and significant nasal swelling for the first month after surgery. Six months later she shows a lot of improvement but her tip fullness (persistent swelling) is still not what we want the ideal result to be. All other objectives have been met. Re-evaluation will be done at one year after surgery. 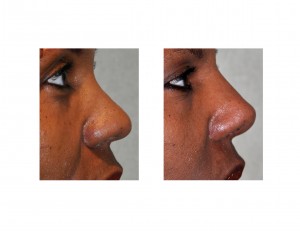 Like all rhinoplasties, the thickness of the nasal skin plays a major factor in how refined the result will be. In the end, the refinement of the tip will be controlled by how the skin responds to surgical manipulation. There is also the restricting factor of a short columella which tethers skin across the upper nostril area (soft triangle) as the tip projection increases. Some African-American rhinoplasties will require a secondary tip procedure for further effortsat obtaining a more ideal tip shape.

1) The African-American nose has a structure typified by a low nasal bridge, a wide and flat tip and and increased nostril width.

2) The African-American rhinoplasty aims to increase dorsal height and tip projection and narrow the tip and nostril width. In essence, pulling the nose forward from the plane of the face.

3) The key component of the African-American rhinoplasty is structural support for augmentation, using either cartilage grafts or synthetic materials. The thickness of the nasal skin will ultimately affect the degree of refinement obtainable.