Background: Dogbites in children are not uncommon and they are often bitten more than in adults. Bites to the face are frequent in young children due to the their height similarities to some dogs as well as a dog’s tendency to lunge at the face and neck. Children frequently see a dog as ‘cuddly’ and even a well known dog can take a defensive response to such behavior.

Dogbites typically result in numerous linear lacerations due to multiple front teeth. The injuries often have a classic pattern as the dog lunges forward and the victim’s face pulls back. This causes numerous puncture sites followed by linear lacerations that tear facial structures that cross the path of the teeth.

The eyelids are not common sites of dogbite injuries due to their recessed location protected by the bony orbital rims. But the thin tissues of the eyelids are easily torn with potential disruption of the lashline and the lacrimal duct. 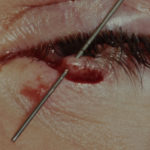 Case Study: This young female child was bitten by a dog resulting in multiple periorbital lacerations and a tear through the inner her eyelid. This lower eyelid laceration resulted in transection of the lacrimal duct below the puncture.

In surgery the lacrimal duct was canalized by a silicone Crawford tube passed between the upper puncture into the nose and through the lower lid punction through the lacrimal sac and into the nose where the two ends were tied off. The silicone tube was left in placed for six months whereafter it was removed. The remainder of the lower eyelid reconstruction consisted of anatomic realignment of separated lower eyelid structures.

Her one year lower eyelid reconstruction followup showed well healed lid lacerations that were barely detectable and a fully functioning lower eyelid drainage system as evidenced by no problems with chronic tearing.

1) Traumatic lacerations of the lower eyelid run the risk of lacrimal duct transection.

2) In repair of lacrimal tube transactions it needs to be canalized with a silicone tube for both the repair and during a prolonged healing phase.

3) Lacrimal tubes can be removed six months after the initial repair with a high likelihood of a functioning lacrimal duct drainage system, particularly in children.