Background: The nasal hump is probably the most common request for change in a rhinoplasty. By history rhinoplasty has its origins largely for reduction of large nasal humps. While once done in isolation, hump reduction in rhinoplasty today is usually just one part of a series of technical maneuvers that changes the overall nasal shape of the underlying bone and cartilages.

While many patients with nasal humps want only the hump removed, this is often an aesthetic mistake. As a nasal hump of any size is reduced the length of the nose becomes perceptibly longer. This can also unmask a nasal tip that is turned down or has too acute of a nasolabial angle. Computer imaging will reveal these type of changes before surgery and can help a patient understand how a single change in one nasal area can effect the whole appearance of the nose. Thus, the most aesthetic rhinoplasty result usually entails a more comprehensive anatomic approach.

But in uncommon cases there are patients with nasal humps or wide upper noses that only want this area changed…and their nose will not end up aesthetically unbalanced. They may already have satisfactory nasal tip width and their nasolabial angle may be within a normal range. (good tip rotation/projection) Again computer imaging will help make that visual determination for the patient and confirm that their desire for just a hump reduction will be a true aesthetic improvement.

Case Study: This 18 year-old female did not like the appearance of the upper third of her nose. She felt it was too high and was too wide. She did not have a true nasal hump but rather had a high radix with wide nasal bones.  (overgrown nasal bones) The remainder of her nose was very acceptable to her and she desired no other part of her nose changed. She has a nasal tip that was on the cusp of being over rotated or too short. 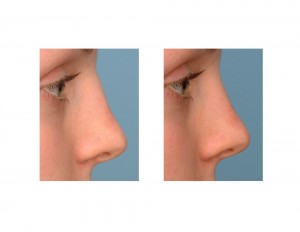 Under general anesthesia, she had a closed rhinoplasty to reduce the nasal bone above the osteocartilaginous junction. This was done with an internal osteotomy combined with a 2mm osteotome done externally at a 90 degree angle from the inside bone cut. Medial and lateral osteotomes were then performed to narrow the width of the nose between the eyes. No other procedures were performed on her nose. 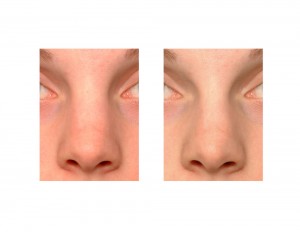 Her postoperative results showed a major change in the width of her nasal bones and a slight reduction in the height of the radix. This changed the front outline of her nose to more pleasing dorsal lines and a better relationship between the upper nose to the tip.

The high and wide upper nose is different than that of the classic nasal hump. It is an overgrowth of bone that is above the osteocartilaginous level, the typical location of a nasal hump. This is a pure nasal bone aesthetic deformity. Lowering the height of the radix is difficult due to the thickness of the nasal bones in this area and will not be reduced much by rasping alone. Osteotomies or power-driven guarded burrs are need to take this thick bony area down.

1) Hump reduction is one of the most common requests for nasal shape change in rhinoplasty.

2) Nasal hump reduction is rarely successful by a simple shave or rasping, contrary to popular perception. This is particularly true in the high and wide nasal bony deformity nose

3) Most nasal hump reductions or bony height reductions of any significance will result in an open roof deformity which is treated by nasal osteotomies.