« The Inner Thigh Gap – Can It Be Created?
Endosopic Reduction of Prominent Brow Bones »

Background: Aesthetic nasal concerns present in a wide variety of deformities throughout the length of the nose. One of the more common basic nasal concerns is the wide or broad nasal tip. Some patients call it a fat tip or a bulbous tip. While all of these names seem synonymous there are actually a wide variety of tip deformities that fall under the category of the so-called broad nasal tip.

Tip modifications are the most common denominator amongst all rhinoplasty procedures. While an occasional hump reduction (upper nose) is done in isolation, it is much more common to do an isolated tip reshaping. (lower nose) There are probably few primary rhinoplasties ever done that don’t do at least some minor adjustment to the lower alar cartilages.

Case Study: This 44 year-old female wanted to change her broad nasal tip. She felt it was too big for her face and unatractive. She had always wanted it changed and now had the resources to have it done. She had no concerns about her upper nose and was fairly happy with the nasal bridge. She did have a minor hump at the osteocartilaginous junction and modestly thick nasal skin. 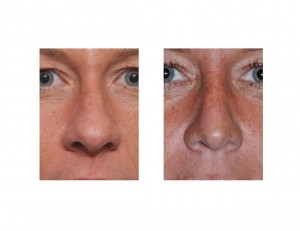 Under general anesthesia, an open rhinoplasty was performed degloving the skin up to the nasal bones. Her very big lower alar cartilages were modified by a 7mm cephalic trim, the intradomal shape narrowed by horizontal mattress sutures and the interdomal gap narrowed by sutures. A small reduction was then done on the hump area by cartilage trimming and bony rasping. Heavy taping and a splint were applied right afterwards, 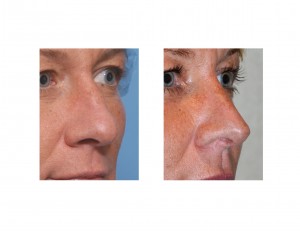 The tapes and splint were removed after a week and she had the very typical rebound swelling in the tip which took a full six months to really resolve into a good tip shape. Awaiting to see the final nose shape was a bit difficult for her, as it is for many patients, given the months that it takes to get there. Her final result was very similar to that predicted in the initial computer imaging. 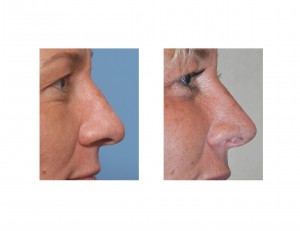 While tip modifications are a part of most rhinoplasties, they always take the longest in which to see the final result. Most patients are not really prepared for the length of time it takes to get there and the slow readaptation/shrinking of the tip skin around the altered cartilage framework can seem inexorable. This is magnified in the patient who has thicker nasal tip skin.

1) The wide or big nasal tip is a common motivation to undergo rhinoplasty.

2) A rhinoplasty result in which thinning the nasal tip and giving it more definition is highly influenced by the thickness of the overlying skin. The thicker the skin the longer it takes to see the final result.

3) When the nasal tip is modified, usually changes above the tip along the dorsal line are needed as well for nasal balance.