Background: Aesthetic nasal deformities come in a wide variety of shapes and sizes. While plastic surgeons have anatomic terminology to describe these nasal deformities, patients refer to them in much simpler and more visually apparent descriptions. It is extremely common that a patient presents for a rhinoplasty that wants to improve their ‘fat nose’. What a fat nose is can mean different things to different people but one can be assured that the nasal tip is a primary culprit in their concerns.

A fat nasal tip refers to lower alar cartilages that may be large, widely spaced or both. In many cases they may even be weak in structural support as well. This creates a nasal tip that is broad and lacks definition. Sometimes the tip is broad compared to the rest of the nose which is much thinner. Other times, the entire nose is wide from the nasal bones down to the tip. For many Caucasian noses in thin younger women, it is the former where the upper nose is reasonably thin and the tip is disproportionately wide. Hence the description of ‘I have a fat nose’…even though the nose is not truly fat from top to bottom.

Correction of a wide nasal tip is done by changing the shape and position of the lower alar cartilages. When done in isolation, this is known as a tip rhinoplasty. This means the lower alar cartilages and the causal edge of the septum are modified. This may or may not be done using cartilage grafts, most commonly columellar struts and/or tip-defining grafts. Tip rhinoplasties can be more extensive to also changes in the middle vault cartilages and even rasping of the nasal bones. The only rhinoplasty step excluded in a true tip rhinoplasty are nasal osteotomies. 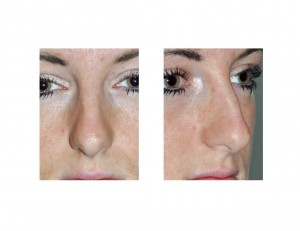 Case Study: This 19 year-old female wanted to get rid of her ‘fat nose’. She felt her nasal tip was too big and lacked a nice shape. She wanted a slimmer nose with a narrow tip that had a slight uplift. In essence she wanted a more petite nose. On examination and by computer imaging, her tip not only needed to be narrowed and shortened but she also needed a slight reduction of the middle vault height and a 1 to 2mm reduction of the end of the nasal bones. 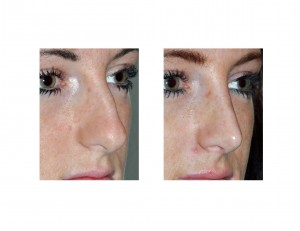 During her surgery, an open rhinoplasty was performed for access. Initially, the superior edge of her septum was reduced and the osteocartilaginous region was rasped down to make for a smooth dorsal line down to the tip. A wedge excision was done on the caudal edge of the septum to allow for nasal tip shortening. A cephalic trim was done was done on the lower alar cartilages and dome sutures placed for tip narrowing. 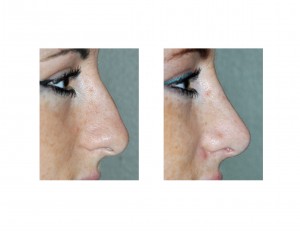 Her postoperative course required nasal taping but no splint was used since osteotomies were not done. The tapes were removed one week later.  She did not get any undereye bruising and had no facial swelling. When the tapes came off, the tip already looked less wide despite the swelling…which is always a favorable sign for an improved long-term result.

In looking at her three months after surgery when most of the swelling was gone, she was happy with the appearance of her nose. The tip was more narrow and slightly shorter and more refined…the goals that she wanted to achieve from a rhinoplasty surgery.

1)      What most patients refer to as a fat nose almost always refers to a tip deformity that is wide and lacks definition.

2)      Most fat nasal tips are best treated by an open rhinoplasty with conservative defatting and more aggressive tip modifications. It is almost always necessary to adjust the level of the dorsum also.

3)      Patients with thin nasal skin will have less swelling and be quicker to an improved result than those with thick skin.