Background: Undesired shapes and sizes of a nose comes in many different forms. But one common nasal shape concern is that of the thick or fat nose. This type of nose problem almost always has thick skin and a very round or broad nasal tip. The nasal tip is often not only wide but is heavy and usually hangs down, creating a droopy nose appearance. In patients with a thick nose, the desire for a slimmer one is universal.

While the ‘fat’ nose can occur in anyone, it is more common in certain ethnic groups that have thicker skin with more pigment. While these thick noses have broad and wide tip cartilages underneath, the skin is a major contributing factor to what makes the nose look big and ill-defined. It is important for the patient to recognize that there is limit to how much the nose can be changed with rhinoplasty techniques of cartilage and bone manipulation.

Case Study: This 52 year-old female had long been bothered by the appearance of her nose. Because of her concerns, she did not wear her hair pulled back as she felt it make her nose too obvious. She felt she had a ‘witch’s nose because it was heavy and hung down at the tip. It was broad and thick and lacked a pleasing shape.

She underwent an open rhinoplasty that focused on reshaping her tip cartilages. The caudal septum was shortened and the lower alar cartilages were narrowed and reshaped by sutures to a columellar strut graft placed between her medial footplates. Additional suturing of the tip was done to create more a supratip break. Her dorsum was rasped and the nasal bone narrowed by low lateral osteotomies. 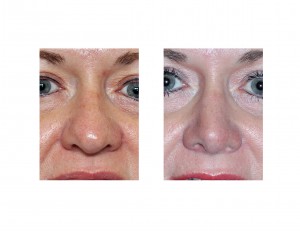 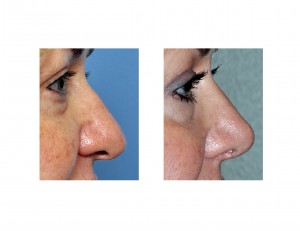 Her splint and tape nasal dressing was removed a week after surgery. Some of the improvements could be seen (tip elevation) immediately but the swelling prevented any obvious change in the tip refinement. Slowly over the next three months, the tip and the rest of the nose ‘shaped up’ and the results of the surgery became more pleasing. Over the next 9 months, out to a year after surgery, the shape of the nose will continue to evolve and get even better.

In the thick-skinned broad nose, the fat nose, patience is the key to seeing the final result. Don’t be discouraged when the initial splint is removed and it isn’t exactly what you expected to see. Tip swelling can be considerable and takes months to go down. There is also a limit as to how refined and narrow the fat nose can get.

1) Rhinoplasty for the fat or wide nose focuses on changing the shape of the tip through cartilage reduction and modification. How much narrowing of the nasal tip can be obtained is limited by the thickness of the overlying skin.

2) The swelling that occurs after rhinoplasty of the tip of the nose is considerable in the thick tip and may make seeing significant improvement an issue of weeks to months to occur.

3) It is not possible to make a fat wide nasal tip narrow without multiple surgeries and the risk of tip deformities and other complications.