Background: A common cosmetic operation in African-Americans is that of rhinoplasty. (nose reshaping) There is a dramatic difference in the nasal structure between that of this racial group and Caucasians. The nose shape is broader and flatter from the bridge down to the tip. This is a reflection of the underlying cartilage framework which lacks both projection and volume. Usually the cartilages are softer and less supportive as well.  The changes that are planned must be harmonious to the face, however, and keep within some resemblence of their base ethnicity. Few patients want a ‘Michael Jackson’ nose which violated not only good facial balance but also pushed the envelope of what the tissues can tolerate. (trying to make too narrow of a nasal tip turned into a disaster)

One of the challenges in African-American rhinoplasty is the thick and oily skin that most patients have. This thick skin imposes several disadvantages including prolonged swelling after surgery and a limit as to how refined the nose can look. In general, a small delicate look to the nose in most African-American rhinoplasties can not be surgically created. It is also ill-advised to try and do so as well. One advantage to thick skin, however, is that any irregularities of the underlying bone and cartilage which has been manipulated will not be easily seen. This often provides little consolation to the patient who is hoping, however, for a more refined result. 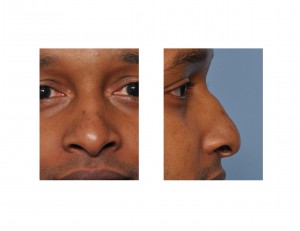 Case: This is a 28 year-old African-American male who did not like the shape of his nose. Interestingly, he initially just wanted his ‘hump’ removed. But on further discussion he also felt that his tip was wide and flat and his nostrils were too flared. This only became apparent to him when computer imaging manipulation was done comparing hump removal alone and in conjunction with tip changes as well.

Because of some prior orthognathic surgery (mandibular advancement) performed earlier in the year, he had a cephalometric x-ray and an old style xeroradiogram which showed beautifully how ‘underdeveloped’ his septal cartilage was. It became apparent that his hump was really only a pseudohump and only appeared as such because of the lack of septal height. At the tip area, the superior caudal septum was completely rounded off. This accounts for why the tip cartilages were not positioned on the apex of the septal cartilage and had essentially ‘slid off’ of the normal septal support. This anatomically also explains the flat and wide tip and relatively short columella with flared nostrils. (increased alar base width) 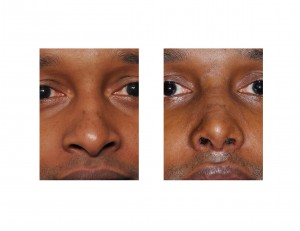 His rhinoplasty was done through an open approach. The hump was not reduced but a cartilage graft was placed above in the radix area. A columellar strut graft was used to both secure and lengthen the medial footplates as well as serve as a method to attach it to the end of the septum. This effectively eliminated his drooping tip and helped narrow it. Sutures were then used to narrow his tip further. Some cartilage was removed from the cephalic margins of the lower alar cartilages. Lastly, his nostril width was narrowed using alar wedge excisions. 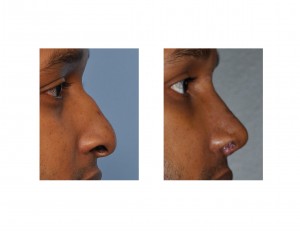 At the end of the first week his nasal splint and tapes were removed. While swelling is still present and the incisions lines are not healed, the changes are immediately apparent. He will go on to have further nasal refinement in the ensuing weeks to months.

1)      The African-American nose often has a pseudohump deformity which is created by a sagging and comparatively flat tip of the nose. The nostrils are flared as a result of the tip cartilage shape.

2)      The use of computer imaging is extremely important to help the patient choose a final rhinoplasty result that is not ethnically incongruent with their aesthetic goals. The thick nasal skin will allow for prolonged swelling which the patient must anticipate.

3)      Open rhinoplasty and cartilage grafting is critical to establish support for significant tip changes. The nasal dorsum usually needs cartilage addition, not reduction, to make for a better and more refined dorsal line.