Background: Rhinoplasty is a procedure that often requires some form of augmentation or structural supplement. Some surgeons perform this part of rhinoplasty using only autogenous materials such as cartilage grafts while other feel comfortable using synthetic implants. There is is no right or wrong in the debate between autologous vs implant augmentation in rhinoplasty although there are devout advocates on both sides of the debate. The more important question on this issue is what are the benefits vs. liabilities for either method depending on the nasal problem one is trying to solve.

The saddle nose deformity, particularly one caused by a prior rhinoplasty, requires dorsal augmentation and often greater support to the tip of the nose. Implants can certainly be used as a treatment option for this weakened support of the nose. Because implants are bigger and a range of sizes exist, it is very easy to create a nose that is over augmented in both height and width. Implants placed in the tip of the nose will also have a more rounded shape to avoid creating a pressure necrosis of the overlying nasal tip skin.

Revision rhinoplasty of a nose that has been augmented by implants raises the choice of either modification of the implant or replacement with a cartilage graft. Implants naturally create a surrounding capsule or scar tissue which adds to its potential thickness. Scar tissue combined with a rounder shaped implant in the tip of the nose can create an undesireable widened shape.

Case Study: This 50 year old female had several prior rhinoplasties which involved nasal implants (Gore-tex sheets) in the dorsum, columella and tip of the nose. This lead to a thickened overall appearance to the nose. Attempts to make the nose thinner and have a better shape by implant thinning were met with little improvement. 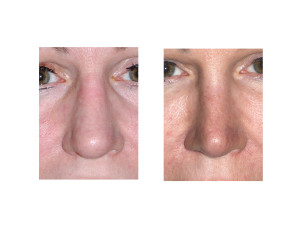 Under general anesthesia her revision rhinoplasty was done through an open rhinoplasty. The Gore-tex grafts and all surrounding scar tissues were removed. Because of a lack of adequate septal cartilage from procedures, a small rib graft was used to reproject the tip of the nose and provide some additional augmentation to the lower end of the dorsum. 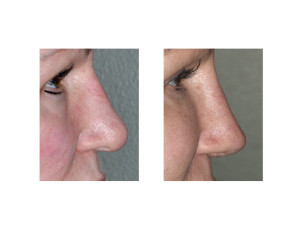 Loss of support of the nose when implants and scar tissue are removed require the concomitant placement of cartilaginous support. In this case, small finely carved rib grafts were used to create a thinner system of structural struts. Cartilage rib grafts have the advantage of being to push the overlying nasal skin with thinner ‘pressure points’ as there is a lower risk of doing so with autogenous materials. Cartilage grafts also do not develop the same amount of scar tissue since they are not a synthetic material. These are decided advantages when trying to achieve a thinner and more shapely nose.

1) Noses that have had multiple rhinoplasty surgeries often end being distorted with thickened tissues.

2) Implants in the nose can be source of considerable scar tissue and can create a bigger but thicker nose.

3) Removal of implants and scar tissue may require replacement with structural support with cartilage grafts in a revision rhinplasty for shape improvement.